Ho, Ho, Ho, Merry Christmas everybody and don’t get your jingle bells in a twist, get them spinning instead. In the latest festive feature from NetEnt, we join a band of merry elves trying to help you win some festive funds for Christmas and beyond! Whether you think Christmas should stay in the December months or be celebrated all year round, Jingle Spin is a game for everyone to enjoy. 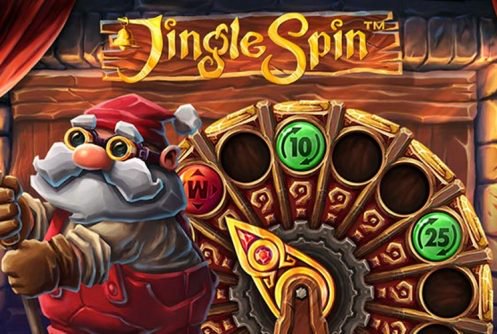 Play Jingle Spin on any of these top casino sites;

Jingle Spin is a 5-reel, 20 fixed pay line slot that offers a magical 96.48% RTP. Looking like a scene right out of Santa’s workshop, the reels are set out to look like they are sat right in the fireplace. There are 5 helper elves atop the reels and at the side you will see a Santa type character spinning the wheel too. These elves have a special purpose within Jingle Spin which will be explained below. As the reels spin there is a mechanical clicking sound like the wheels of a big machine turning and there is a very Christmassy sounding tune playing along as well.

Bet Amounts – Betting on Jingle Spin begins at 20p per spin and can be increased to the maximum of £200 per spin. There are two ways to amend your stake amount here, by changing the coin level or coin value. Coin level is found to the left of the spin button and coin value to the right of it. Adjust each of these using the plus and minus signs until you are happy with your stake amount. Always double check before you hit spin, because once you click there’s no turning back.

Wild Symbol – A beautifully wrapped gift is your wild symbol on Jingle Spin and it will substitute for all others in the game to help form winning combinations. It also has a vital role to play in the spinning wheel feature too, so read on below to find out more.

Scatter Symbols – There is no scatter symbol as such in the main game of Jingle Spin to trigger the feature. Instead it is triggered by the spinning wheel feature at the side of the reels. 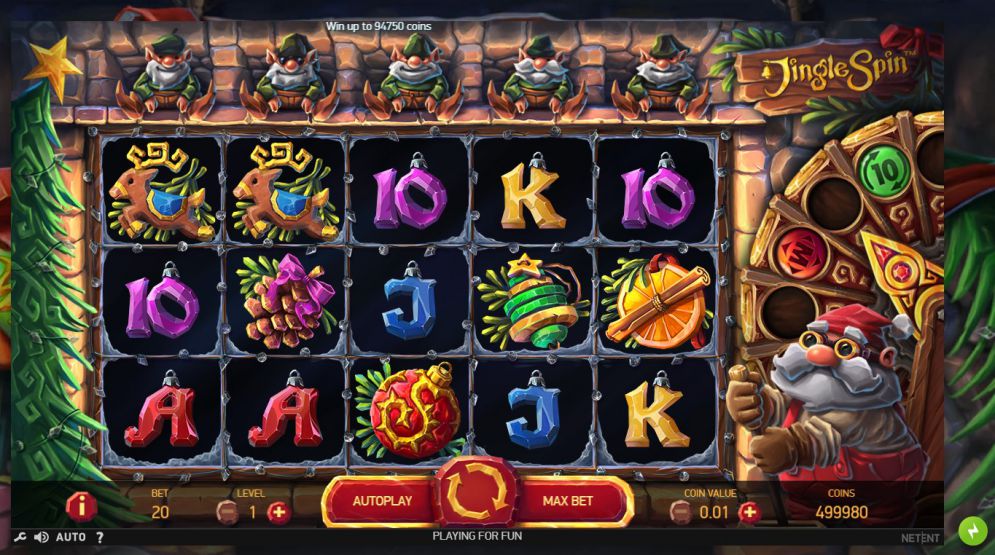 Other Symbols – Your symbols on Jingle Spin all take inspiration from the theme too, with all of them being converted into bauble designs. Higher symbols include a red bauble with a gold S for Santa we assume, a reindeer bauble, a pinecone bauble, a Christmas tree bauble and an orange and cinnamon stick bauble too. Lower values symbols are the usual A, K, Q, J and 10 which again look like baubles, giving a festive feel to the reels.

Spinning Wheel Feature – Each time the reels spin in the main section of the screen, you will see that the wheel at the side of the reels is also spinning. The helper elf stood by the reel will set the wheel in motion on each spin and it is a nice way of winning some little extras. As the wheel spins there are different types of baubles on it including lots of blank spaces. When the reels end their spin so too does the wheel. If it has landed on a bauble that will then be popped up to the first helper elf atop of the reels. With each subsequent spin it will move along to the next elf.  Once it reaches the end of the reels without a wild symbol landing below an elf to trigger it, then it is thrown into the tree.

Bonus Spins Feature – In order to trigger this feature on Jingle Spin, you need Santa to have spun the wheel to the left and a green bonus spins bauble to have been handed to the helper elves. The baubles are placed on the wheel at random and can only be activated if a wild symbol lands on the reels below the elf holding the bauble. But you could earn any amount of spins from 7, 10, 12, 15, 20, 25, 30 and even 50. However, in addition to the bonus spins your spinning wheel feature will have no blank spaces and four out of the five elves will be handed a bauble straight away. This means that on every spin of the reel a new bauble is handed up to the elves.

Well, Jingle Spin certainly has a lot going on doesn’t it, as busy as the workshop itself. We loved the noises and animations coming from Santa and the helper elves, it really made the whole game more enjoyable. The only downfall is that the spinning wheel feature doesn’t turn up as many bauble wins as you would want from a game of this nature. When the bonus spins are activated, that wheel is a huge help in creating the bigger wins. The fact that you can re trigger the bonus spins with the wheel is huge value to players, especially with up to 50 extra spins up for grabs in both the main and feature. You will certainly need a sustainable balance in order to trigger the bonus spins initially in the base game, as those baubles aren’t triggered as often as you would hope. But, overall the game design on Jingle Spin and of course that RTP, combined with the sounds and music make for a beautiful Christmas game.