Is it getting hot in here or has someone just turned up the heat? By someone we mean Microgaming, because they have given a basic slot game a major upgrade. Retro Reels Extreme Heat has a distinctive rock theme running through it, with the red flames and awesome soundtrack. But it also offers some great features too, which we are excited to tell you about. Let’s see if you can stand the heat, if not best get out of the casino because as they spin things get hotter by the reel! 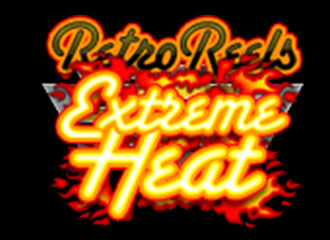 Play Retro Reels Extreme Heat on any of these top casino sites;

Retro Reels Extreme Heat is a 5-reel, 30 pay line game offering a steamy 97.5% RTP for players.  Microgaming have given the basic game design a bit of an overhaul to match the title, surrounding the reels in flames, as well as some of the symbols. In the background there is a rock guitar track playing along, which ramps up when wins land. Higher paying symbols include the 7’s and the bars, with the lower paying symbols being the bell, lemon and cherry.

Bet Amounts – Betting begins at 1p per line in play up to 25p per line in play and the fun doesn’t stop with amending the lines active. You can change the lines active, the value per line and also the coin level in Retro Reels Extreme Heat. This gives players a wide choice when it comes to betting options, beginning at 1p per spin and increasing up to the maximum of £112.50 per spin.

Wild Symbol – A dollar sign with flames behind is your wild symbol in Retro Reels Extreme Heat and it will substitute for all other symbols except the scatter. It is also your highest paying symbol in the game, offering players a whopping x10,000 coin win for landing 5 of them on an active pay line.

Scatter Symbol – Your scatter symbol is the words bonus spins, again engulfed in flames in keeping with the theme. Landing three or more of the scatter symbol anywhere on the reels will trigger the bonus spins. Scatter wins are also in play in Retro Reels Extreme Heat and they work by awarding an extra win on top of your line win as follows.

Reel Respin Feature – In a bid to bring an aging design into the modern era, Microgaming have added something called the reel respin. This means each reel can be respun as a separate reel, independent of all the others. The benefit of this to players is that if for example you have landed a scatter symbol and want to try and spin the other reels alone to land another, you can do just that. But, there is a twist and a cost for this option. At the bottom of each reel there is a value, this value changes on every single spin of all reels and is an indicator of what each reel can bring to your potential win. The higher the number on the reel shows it is more likely to bring you a winning combination and of course the lower the number, the less likely it is to land a win. So be sure you really want to spin that reel and weigh up the costs and the potential wins on offer, before hitting spin. 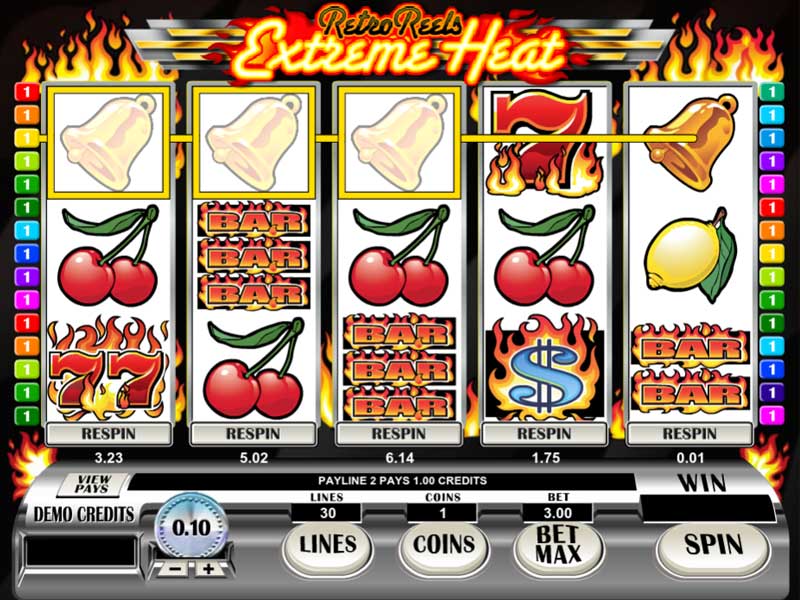 Bonus Spins Feature – To trigger the bonus spins you will need to have landed three or more of the scatter symbol anywhere on the reels. Once you have done this you will be allocated a number of spins depending on the number of scatter symbols you landed.

Bonus spins can be retriggered from within the round by landing three or more scatters on the reels and this is unlimited, which is good news for players. But, as well as that, every win you land will also be awarded a x2 multiplier on top.

Wild Jackpot Feature – As you have read above, the wild symbol is the highest paying in the whole of the game. However, it isn’t called Retro Reels Extreme Heat for no reason, there is an awesome jackpot win waiting for a lucky player to collect. To do this you need to land x5 of the wild symbol on an active pay line whilst in the bonus spins round. Do that and you will bag yourself the jackpot win of x440,000 coins and will probably follow it up with a happy dance.

Fast paced and furious is the best way we can describe Retro Reels Extreme Heat. Microgaming have certainly fanned the flames with this one and will leave you burning for more. Whilst combining older generation slot design with up to date features, it makes for a winning combination that we know you will love as much as we do. If anything, those guitar riffs when the wins land will get the blood pumping! Wins come thick and fast throughout the entire game as is expected with such a high RTP. But then we should also consider that amazing bonus spins round which can be retriggered easily and brings with it more chances to win. If you haven’t played a game like this before and usually aim for the video slots, then this is definitely going to be a change for you. But we think you will agree it will be a change for the better, because sometimes less is more and that is the case with Retro Reels Extreme Heat.