Roman and gladiator themes are incredibly popular for slot game designers, because they instantly add excitement. Playtech have added their own creation called Rome and Glory, which bring the thrills and spills of the genre to the small screen. But will it be a hail Caesar of a game? 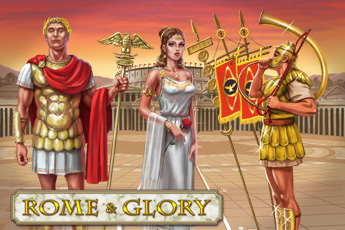 Play Rome and Glory on any of these top casino sites;

Rome and Glory is a 5-reel, 20 pay line slot offering a lowly RTP of 94.36% to its citizens. Your reels are set against what looks like marble columns fit for Caesar’s palace and there’s a soft Romanesque backing track, to keep those ears entertained whilst playing. All the symbols are taken from imagery of the time such as chariots, SPQR banner, scrolls, goblets, grapes and of course Caesar himself.

Bet Amounts – Betting begins at 1p per line in play and can be increased to £5 per line in play. You also have the choice of adapting the coin level from level 1 to level 10, to increase your bet amount. This means your spin costs can range from 20p to a whopping £1000 per spin. We would advise you double check that you have selected the right bet per line and the right stake amount, before hitting spin. 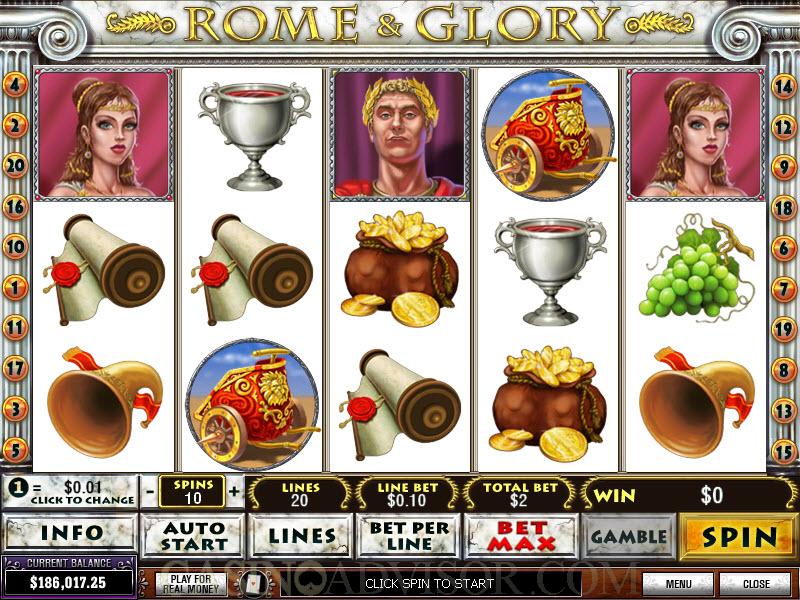 Wild Symbol – In Rome and Glory your wild symbol and scatter are one and the same, which is a bit of a twist. Look out for the Colosseum, as 3 or more anywhere in view will award scatter wins and trigger the bonus game. Scatter wins can be allocated by landing 3 or more scatters anywhere in view and are paid on top of the line wins.

Colosseum Bonus Feature – Having triggered the bonus feature by landing three of the colosseum symbols, you will be awarded 10 bonus spins. There will also be a mystery scatter chosen for this round only. This will aid in retriggering the bonus and landing more scatter wins too. There is no limit to the amount of times the bonus can be retriggered, so this could prove to be very fruitful for players.

Duel wild/scatter symbols is something we don’t see very often, so Playtech had us a bit confused for a second. But once we got out heads round it, it actually works in your favour. They could have offered a lot more by way of features and bonus games considering the theme, but overall its not a bad slot to play. Especially once that bonus round kicks in, as it can be retriggered multiple times with no limits. So, hit a lucky streak and that bonus round can play on for a long time and award some big wins. We wouldn’t suggest Rome and Glory for when you are in the mood for a long play, but for quick time wasting game it is perfect.