If chilled out music, colourful interstellar themed symbols and two interesting features are your thing, then you are going to love this next slot. NetEnt has created a bright innovative slot called Sparks and it is going to brighten up your day that is for sure. Whilst NetEnt are known for their more in-depth features, sometimes less is more and we think Sparks is proof of that. 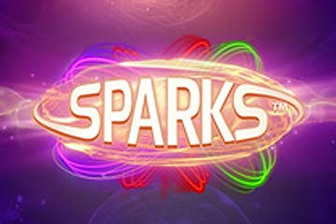 Play Sparks on any of these top casino sites;

Sparks is a 5-reel, 20 pay line slot offering a variable RTP of 96.54% to 96.56% and an interesting twist to the pay line structure. The reels are transparent as the symbols seem to be spinning in space. Symbols are a variety of intricately drawn star like icons, even the letter symbols have been given a starry feel to them. Higher values are a red, orange, green, purple and blue star/spark shapes and lower symbols are A, K, Q, J and 10 in various colours and designs. All the time the reels are spinning there is an almost ethereal tune tinkling along in the background, making for very relaxing game play.

Bet Amounts – Betting on Sparks begins at 20p per spin and can be increased to the highest stake of £40 per spin. This can be adjusted simply by changing the coin level and the coin value, which can be found on either side of the spin button.

Wild Symbol – Your wild symbol is a bronze coloured ‘W’ in a white orb, and it will substitute for all symbols in Sparks except the cloning wild. It is also your joint highest paying symbol alongside the red spark, offering x200 coin win for landing 5 on a winning pay line. 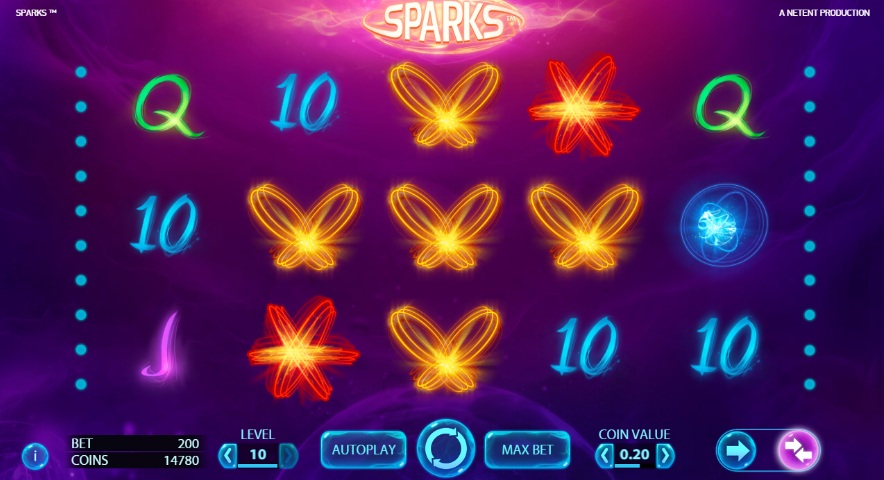 Cloning Wild Symbol – The expanding cloning wild will only land on reels 2 and 4 and is a fiery red orb with a red ‘W’ in the middle. It substitutes for all symbols and has a nifty little trick up its sleeve for players. When it lands it will either stay as it is, expand up, expand down or in both directions. The way it works is simple, it will clone the symbols from the reel on the left and place them to the reel on its right. So, it means that if you land a single cloning wild, the symbol to its left will be cloned to its right. But if you land a fully expanded reel, then the whole left reel will then be cloned to the right. Having both reels 2 and 4 fully covered in cloning wilds will mean you land a 5 of a kind win across the board, as the symbols from reels 1 will be cloned to reel 3 and then to reel 5!

Both Ways Win Feature – Sparks offers players the chance to choose whether you play in the usual left to right direction or both ways. Meaning you can land wins either left to right or right to left. There is no additional cost to playing singular or dual, but there is something you should be clear about. Whilst you may think there is a bigger win potential playing both ways, there is in fact not much of a difference. The RTP for playing one way is 96.56% and for playing both ways the RTP is 96.54%. On looking into the pay table, it shows that the wins work out almost the same whether playing one way or the other. This is because when selecting both ways wins the actual pay line wins have been halved, meaning they work out the same as if you were only playing one way.

Sparks may not have a bonus spins round and the both ways win feature is actual a bit of a let down on the games part. But, overall it is highly fun and fast paced, offering lots of win potential whichever way you are playing. The expanding cloning wilds feature offers players a bigger chance of landing wins. Not just that though because in the off chance you land a fully expanded cloning wild on reels 2 and 4, then even bigger wins are at hand. Whilst we were a little disappointed with the lack of main features, the cloning wild more than made up for it and landed fairly regularly to compensate.

November 12, 2018 Boku Slots Comments Off on Forgotten Land of Lemuria