Microgaming has taken a sci-fi theme and tweaked it somewhat, to make an older looking game more modern. Star Dust has a beautiful theme and is packed full of features to keep everyone who plays engaged. So, let’s delve deeper and tell you what you can expect from this space odyssey. 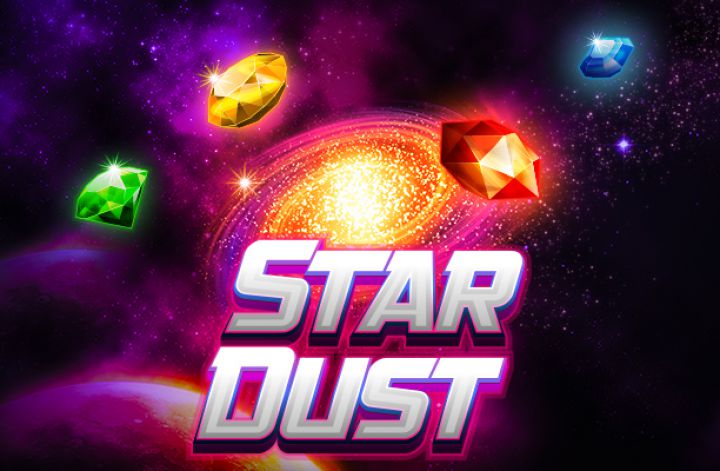 Play Star Dust on any of these top casino sites;

Star Dust is a 5-reel, 40 fixed pay line slot that offers an intergalactic RTP of 96.59% for players. Set out as if it is floating in space and surrounded by a galaxy of starlight, the reels spin transparently giving you a great view of the beyond. As the reels spin there is a soothing soundtrack playing along, which is almost ethereal in sound giving a relaxed feel to the game. Higher value symbols are the four coloured gemstones, red, yellow, green and blue, with lower values being the A, K, Q, J and 10. It was a shame to see that Microgaming hadn’t given the symbols more of a space theme, but they work none the less.

Bet Amounts – Betting begins at 40p per spin and can be increased up to the maximum of £100 per spin. Adjust your bet by expanding the bet screen and changing the coin size and coin value, until you are happy with your bet.

Wild Symbol – Your wild symbol is the Star Dust logo and it will substitute for all others except the scatter. It will appear stacked on all reels when it lands, but due to the positioning will sometimes only land as a partial stack, so be aware of this.

Scatter Symbol – A beautiful galaxy symbol is your scatter in Star Dust and landing one of these symbols on reel three is pivotal in triggering the bonus feature. Scatter wins are also allocated for this symbol when you land 3, 4 or 5 galaxy symbols on the reels. These wins are paid on top of any line wins which is a great bonus for players. The amount given for scatter wins change and adapt as you increase or decrease your bet amount, so be sure to check the pay tables before you play. 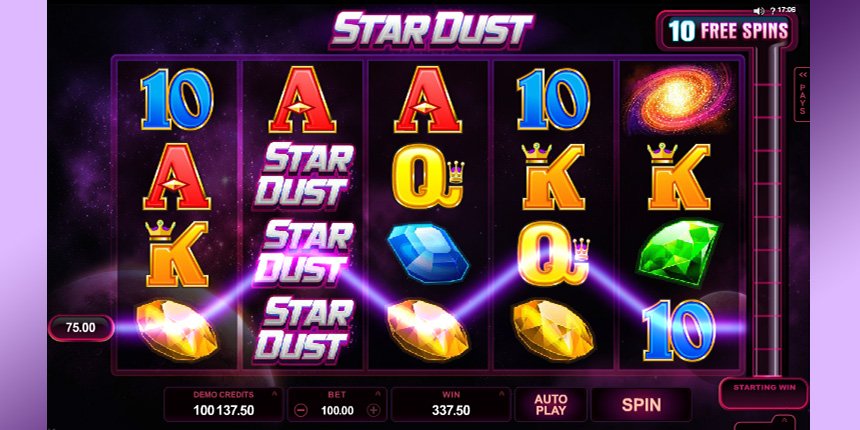 Star Dust Spins Feature – At the side of the reels is a star dust meter and this is where landing the galaxy symbol on reel three comes into play. Every time it lands on the centre reel it will remove a single gem from each reel and place it into the meter. Each gem will add a value to the meter as well as increase it slightly. Once it is full you will get between 10 and 13 bonus spins and an immediate pay out of whatever sum has accrued at the bottom.

The Star Dust spins round operates on a 1024 ways to win pay line structure, as opposed to the 40 fixed that are in the main game. This means that as long as you have three or more matching symbols on adjacent reels you can form a win.

Radiant Respin Feature – This is only active during the Star Dust spins feature but is an amazing addition to the main feature. If you land a three-symbol win, the game will give you a respin of reels 4 and 5. If you land a four symbol win you will be awarded with a respin of reel 5. The radiant respins will occur throughout the entire round of the bonus spins for every 3 and 4 symbol win that lands.

Space is definitely not the final frontier, well not with game developers like Microgaming around. They have taken what could have been a very dull slot and ramped it up a little, giving players of all experience a great game to come back to time and again. The addition of the radiant respins is a welcome change for the bonus spins round and helps to extend it somewhat, and in turn create some extra wins. The only downfall would be the time it takes to trigger the Star Dust spins, as you have to wait for that galaxy symbol to land on reel three. But if it does and you are lucky enough to have gems on every reel, then it soon fills up the meter and gets you into the bonus round.