It is time to don those sunglasses and dream of lazy days on the beach, somewhere like Hawaii maybe? While you are there be sure to look up Inspired Gaming’s beach life slot game, and see what treasures are to be found in Tiki Tastic. 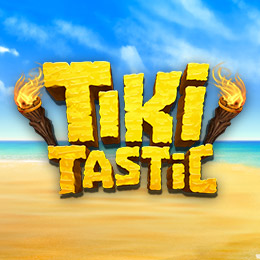 Play Tiki Tastic on any of these top casino sites;

Tiki Tastic is a 5-reel, 20 fixed pay line slot offering an RTP of 95% for players to limbo towards. Set right on the beach looking out towards a calm blue sea, Tiki Tastic is the epitome of a dream holiday with palm trees, beach torches and more. These all add to the theme, as well as the great Hawaiian music track tinkling along too.

Bet Amounts – Betting on Tiki Tastic begins at just 30p per spin and can be increased to a huge £150 per spin. The total bet can be found in the centre of the screen below the reels. There is a plus and minus sign on the bet screen allowing you to adjust the bet amount up or down as you need.

Wild Symbol – Your wild symbol in Tiki Tastic is the word ‘Wild’ being embraced by someone wearing a tiki mask. It will substitute for all other symbols in the game except the tiki girl bonus symbol.

Scatter Symbols – A Tiki Tastic girl surrounded by palm leaves is your scatter symbol. You will need to land 3 or more of these scatter symbols anywhere on the reels to trigger the bonus feature.

Power Modifier Feature – Every so often as the reels spin you will see a letter land on each of the reels. Reel 1 has the letter ‘P’, reel 2 is the letter ‘O’, reel 3 the letter ‘W’, reel 4 the letter ‘E’ and reel 5 has the letter ‘R’. Above each of the reels is the matching letter and when it lands on that respective reel, it will light up the letter above. Once the whole word is lit up above the reels, you will trigger the power modifier feature. Here you will be given the choice of three chests to pick from, choose one chest to reveal one of the three modifiers shown below: 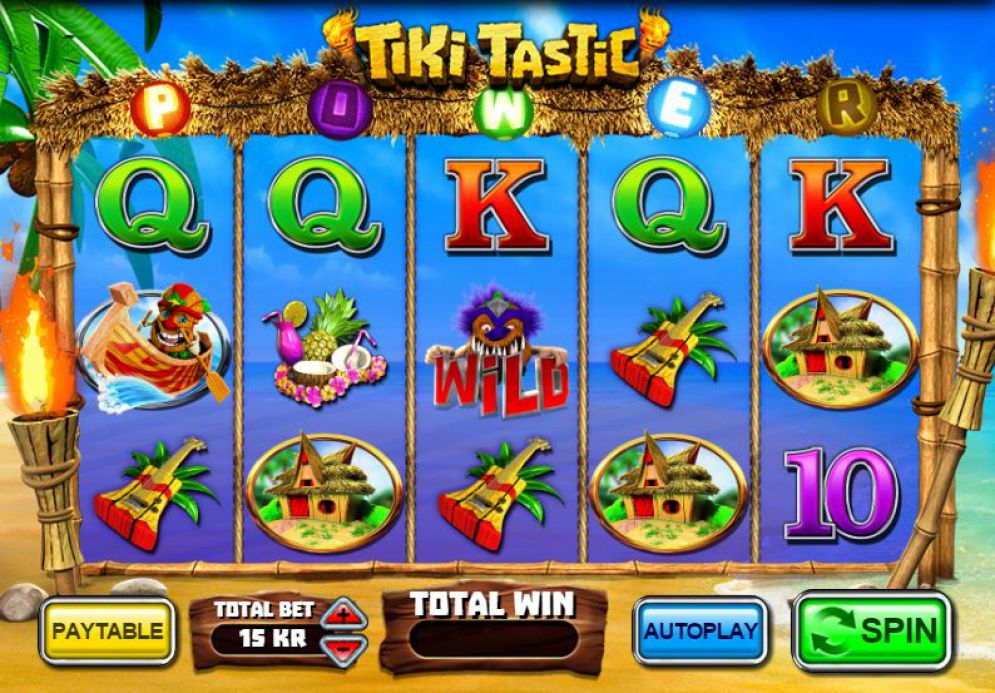 Tiki Chest Bonus Feature – You can trigger the bonus feature in two ways, by landing three or more tiki girl scatter symbols anywhere on the reels in the main game. Or, by triggering it through the power modifier feature which also needs a minimum of three scatters. But as there are more scatter symbols added in the modifier, you have a better chance of triggering it there. Now, you will be taken to a new screen and offered 9 chests to choose from. You will get to pick just 5 of these chests and each one will award you one of the following:

Once you have chosen your 5 chests and revealed the symbols beneath they will be accumulated, and you will be taken into your bonus spins round. Because there are multiple options for all the symbols, you could end up choosing a few different spins symbols as well as the multiplier and/or the lose a symbol. Either way it will make for a very interesting round once you have chosen all 5 chests.

Bonus Modifier Feature – Only available within the bonus spins round, the bonus modifier replaces the power modifier. This means that every time a tiki girl scatter symbol lands, she will award you an extra feature for the spin which include the following:

What an amazing game Tiki Tastic is, although it doesn’t have the highest RTP which may put a few players off. We found that we barely noticed, because the small wins came fast and often, and once you trigger those modifiers you are in the money anyway. Inspired Gaming have put more into the playability of the game as opposed to the overall look, but that doesn’t matter either. The jaunty track playing along boosts your moral as you play, and everything is so colourful you instantly feel brighter. We think many people will find enjoyment in Tiki Tastic in more ways than one and it’s easy to see why it is popular amongst online casino visitors.

Snow Wild and the 7 Features

December 23, 2018 Boku Slots Comments Off on Snow Wild and the 7 Features