There are many slots floating about that have a space theme with gems, stars or both. This slot from NextGen Gaming is called Starmania and does just that with its star shaped gems literally floating in space. But does it offer something that sets it aside from the others? Well we are here to find out. 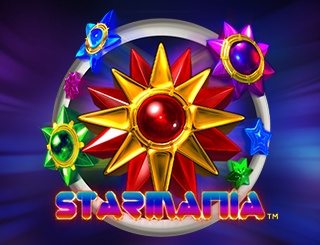 To play Starmania you can head to any of these top casino sites;

Starmania is a 5-reel, 10 fixed pay line slot that offers an interstellar RTP of 97.87%. The reels themselves look like they are moving through space as they spin, which gives it a cool twist. All of the symbols except the bonus and wild are star shaped gems of some sort, which is bright and enticing. We could only find one fault at the beginning and that was the awfully tinny music and sounds playing along as the reels spin, so we switched them off.

Bet Amounts – Betting begins at 10p per spin and can be increased to the maximum of £50 per spin. It may not be one of the highest stake games, but we love that the RTP is still high despite this. Bets can be adjusted either by clicking on the arrows either side of the coin icon on the main screen, or by using the slider in the settings by hitting the cog icon.

Wild Symbol – A neon wild sign is your Starmania wild symbol and it will substitute for all other symbols except the bonus. But it will only appear on reels 2, 3 and 4.

Bonus Symbol – The bonus symbol is depicted by the word bonus, fading down across the screen in what appears to be a video game design. Land three or more of these anywhere in view to trigger the bonus feature.

Gamble Feature – Starmania offers players the chance to gamble each time they land a win. Click the card symbols above the spin button to enter the gamble feature. Here you will be able to try to double or quadruple your win by guessing the correct card suit. If you choose correctly you can guess again up to a maximum of five times, choose incorrectly however and you lose your winnings and are returned to the game.

Bonus Spins Feature – To enter the bonus spins round you will have needed to land three or more bonus symbols anywhere on the reels. You will be awarded 10 bonus spins, and these can be retriggered from within the feature.

At the beginning of each spin in the bonus feature you will be allocated an extra wild to reels 2, 3 and 4. This means that by the end of the round there will be x30 wilds on the reels, meaning a higher potential win for you.

Starmania is actually a clever game in design, its super simple to play with only having the one main feature. Now, this would normally be a negative point for us, but because of the addition of those extra wilds on every spin that changes things. To have x3 extra wilds added on each spin in the bonus feature is a huge help in creating those all important wins. In all Starmania offers a high return for little effort so it’s definitely worth a play.

Jewels of the Orient

April 23, 2019 Boku Slots Comments Off on Jewels of the Orient