We’ve heard about this ancient Mayan ruin where you can relax and enjoy the sounds of birds singing. Oh, and we should mention the massive stone reel which is a spinning bonanza by the name of Temple Quest Spinfinity. Big Time Gaming have developed this absolutely gorgeous slot, so let’s see if it brings the excitement and some of that ancient Mayan treasure. 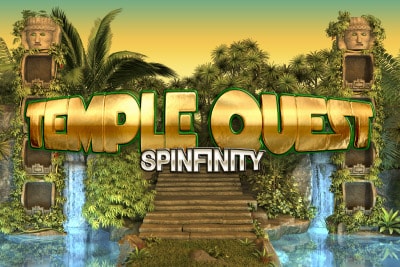 Play Temple Quest Spinfinity on any of these top casino sites;

Temple Quest Spinfinity is a 5-reel, 40 fixed pay line slot, offering a golden RTP of 96.17% for players. As you will see the reels are set out as if they are part of some ancient temple structure, entwined with vines and guarded by two Mayan gods like statues on either side. Higher value symbols include a Mayan mask, two parrots and a green amulet. Lower values include the A, K and Q symbols ornately designed to look golden and jewel encrusted. In the background there is relaxing bird and jungle noises which we enjoyed listening to as we played.

Bet Amounts – Betting begins at 10p per spin and can be increased to £50 per spin in Temple Quest Spinfinity. Adjust the bet amount by using the arrow buttons below the stake, which is set just above the spin button on the side of the screen.

Wild Symbol – Whilst there is a lot of design work gone into the game and symbols, the wild must have been last because it is very, well, boring. Symbolised by the word ‘wild’ written across a red marble stone, it will however substitute for all other symbols except the scatter. Not only that, but it is also the highest paying symbol offering a x375 coin win for landing 5 on a winning pay line. 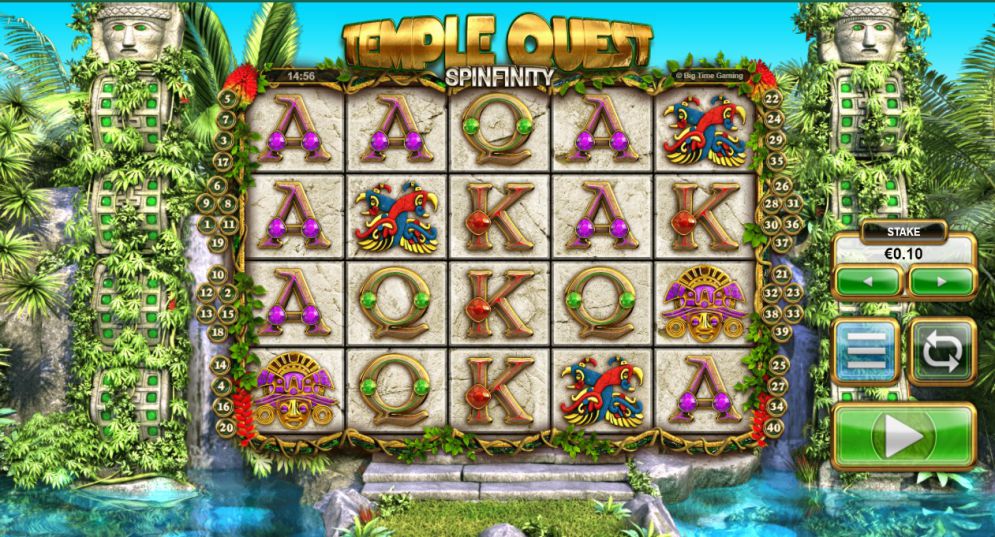 Scatter Symbol – Now, the scatter symbol on Temple Quest Spinfinity is a bit more adventurous, but still a little obvious. It is a giant 3×3 symbol with the word free spins across a golden shield. Land this mega symbol and be instantly transported to the bonus spins round. Your spins are very much decided on where the symbol lands and how much of it is on the reels.

Mega Symbols Feature – Big Time Gaming like to bring something different to their games and in the case of Temple Quest Spinfinity it is the mega symbols. As the reels spin you will see some symbols are 2×2, 3×3 or 4×4 in size. These symbols will contribute to some pretty nifty wins if they land at the right time and the right place of course.

Mystery Symbol Feature – Not happy with bonus spins or mega symbols, Temple Quest Spinfinity offers a mystery feature too. Land the Mayan Temple symbol and when it hits the reels it will transform at random into any of the other symbols but in mega symbol form. This will help contribute to completing any or all potential wins on the reels at that time.

Bonus Spins Feature – We touched upon the importance of the 3×3 scatter symbol above, as this is how you enter your bonus spins round. Land this symbol on the reels and you instantly enter the feature. However, your spin allocation is dependant upon how much of the symbol is in view on the reels. So, if there are only three symbols spaces on view you will be given three spins, but if the whole symbol is in view you will get 9 spins. Finally, and this is the kicker, when you enter the bonus spins round, reel 1 is a normal reel but reels 2, 3, 4 and 5 have been transformed into a mega symbol. It will remain that way for the whole of your spins round and the symbol will change on each spin, so the potential for huge wins here is massive. As well as that the bonus spins can be retriggered within the feature, so land yourself a 4×4 bonus spins symbol and you are laughing. There is absolutely no limit on the amount of times that can happen either.

If we still have you at this point, it is safe to say you have been bowled over by what you have read and are eager to get playing. Hold fire for a few seconds more, whilst we thoroughly enjoyed Temple Quest Spinfinity there is something you need to know. Wins are often on the smaller end of the scale in the main game, which is fine as they happen fairly often. Triggering the full 9 bonus spins is a little harder and can take some time, so if you are in this for the quick wins then maybe rethink. That being said, once the bonus spins did trigger, whether it was with 3, 6 or 9, we did manage once or twice to hit the retrigger which was epic and the wins inside the feature were much bigger too. When all is said and done Temple Quest Spinfinity is a definite addition to our go to list of games.

Age of The Gods

February 23, 2018 Boku Slots Comments Off on Age of The Gods