In terms of pattern matching there is one thing that is the most important and that is to have Symmetry. Realistic Games have taken this idea and created a slot game around it, whether it works or not remains to be seen. But people seem to be flocking to Symmetry, so we decided to check it out for ourselves. 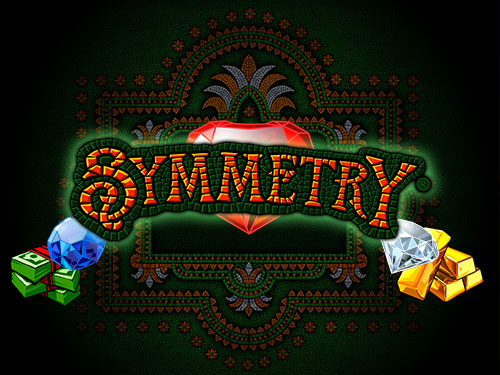 Play Symmetry on any of these top casino sites;

Symmetry is a 5-reel, 10 fixed pay line slot that offers a low RTP of 95.56%. There are no wilds or scatter symbols in this game, but don’t let that put you off as Realistic Games are well known for hiding treats in places you wouldn’t expect. The reels spin above a mosaic design in the background. There is also two bonus features to partake in, despite the fact there is no wild or scatter symbol to trigger them.

Bet Amounts – Betting begins at 20p per spin and can be increased to the maximum of £50 per spin, making Symmetry one of the games that falls into the affordable slot. To adjust your bet, click the smaller button on the screen and choose the bet amount from those on display.

Symbols – With the almost upsetting loss of a wild and a scatter symbol, Symmetry needs to have something up its sleeve to placate the players. The other symbols however are all brightly designed and drawn to catch your eye. The four higher paying symbols are the jackpot, 7, gold bars and wad of cash. Lower paying symbols are the diamond, heart, circle and square, all designed to look like precious gems. 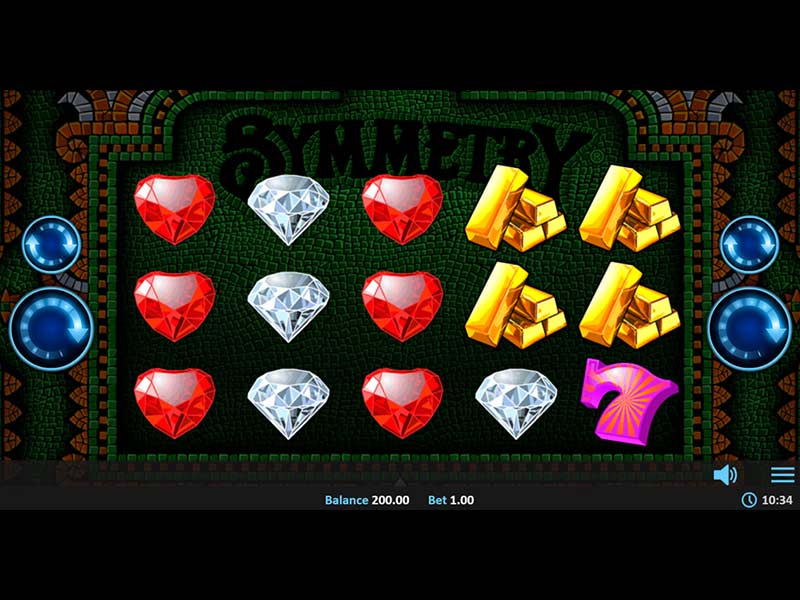 Bonus Feature – This is an interesting twist and occurs more than you would think. To trigger this, you need to land each reel with all symbols covered by one symbol per reel. So, reel 1 would need to have all diamonds, reel 2 all hearts, reels 3 gold bars, you catch our drift. Once all reels have been filled with symbols that match, a flashing light will run across the reels until you hit the stop button. That reel will now freeze in place whilst the rest respin. Once the other reels stop spinning there will be matching symbols to the reel that was held, in order to create bigger wins. You may land 1 extra symbol or up to 3 extra symbols, either way there will be a win of some sort awarded.

Symmetry Feature – Playing in a similar way to the above bonus feature, this round needs you to land matching reels. However, reels 1, 3 and 5 need to have the same symbols and reels 2 and 4 need to have matching symbols. Creating a symmetrical look to the reels and triggering the Symmetry bonus. Again, a flashing light will roll across the reels until you hit the stop button to highlight one of the reels and hold it in place for a respin. The difference here is that whichever reel you land on, the rest of the reels will instantly trigger a full house match and award a big win for you. It can be extremely rewarding if you triggered this feature with any of the higher paying symbols on the reels.

Ok, so Symmetry doesn’t have a bonus spins round as such and it doesn’t have a wild symbol or scatter wins. But it doesn’t matter at all, because the two extremely fun bonus features it does have more than make up for it. That’s what we think anyway, now triggering those bonus features can take some time, so this isn’t the game to play if you are wanting a quick return on your stakes. But if you are happy playing along, you will find base game wins happen often enough to keep you on track. Other than the lack of a wild/scatter, the game itself moves along at a relatively quick pace and is easy to follow and understand so we can see now why it is proving popular with players. Even when the odds are stacked against it, Symmetry is proving that sometimes all you need is some pattern matching to make things better.