NextGen Gaming have taken the fantasy theme and ran with it for this slot. Renegades is a story of strong female characters ranging from the different era’s and indeed realms. It also has a very interesting reel set up too which we haven’t seen before, that lends a certain intrigue to the game. Let’s not forget the epic 243 ways to win as well, this is always a great feature for any slot to have. So far it’s boding well for this band of Renegades. 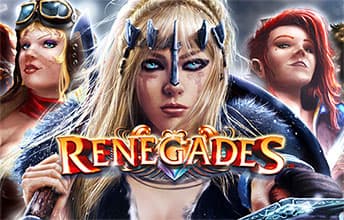 Play Renegades on any of these top casino sites;

Renegades is a 5-reel slot offering 243 ways to win and an RTP of 96.37% for players. Your reels are set out in a standard format for the most part, but there is the addition of mega symbols which will be explained later. These mega symbols certainly make for an eye-catching change to the reels that’s for sure. There is some sort of battle ground scene beyond the reels and the music playing isn’t as mood enhancing as you would expect from a game such as this. We in fact switched off the sounds in the end as it was more distracting than anything. Symbols include the 5 main character women, Freya, Harriet, Raffaela, Valda and Ivy as your high value symbols, with coloured gemstones as your lower values.

Bet Amounts – Betting on Renegades begins at 40p per spin and can be increased to the maximum of £80 per spin. Amend your bet by clicking on the gear icon and adjusting the slider, or by using the arrows either side of the coin stack at the bottom right of the screen.

Wild Symbol – Renegades wild symbol is the word wild emblazoned in front of a raging fire. It will substitute for all other symbols except the scatter. As well as this it is also your second highest paying symbol, offering x250 coins for landing 5 in a winning combination.

Scatter Symbol – The scatter symbol is depicted with the word bonus, almost looking like its been encased in ice. Land three or more of the scatter symbols to trigger the bonus feature. It not only offers scatter wins on top of line wins but is also your highest paying symbol too. Offering a huge x400 coin win for landing 5 of these symbols in a winning combination. 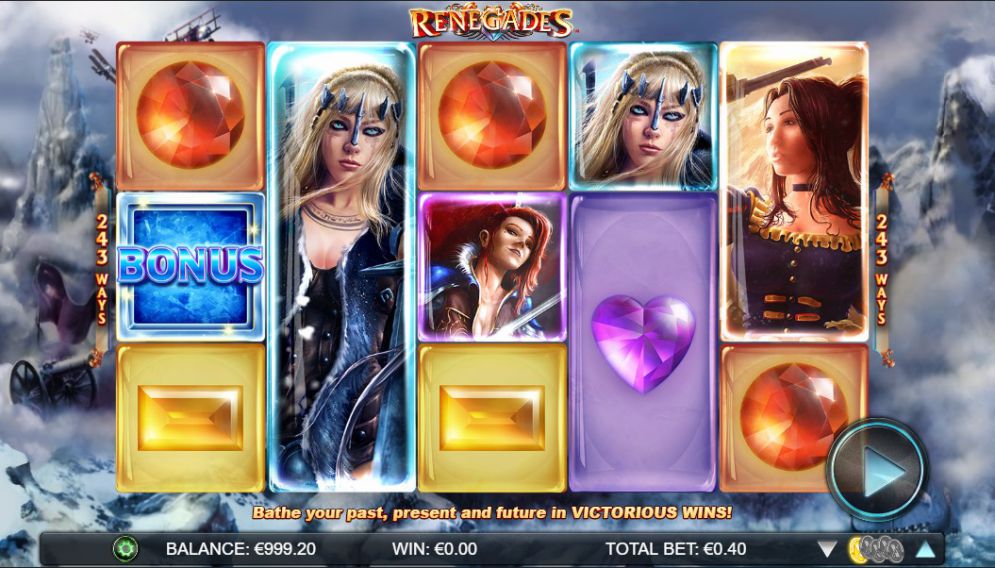 Mega Symbols Feature – During the game at any point reels may randomly lock together to form mega symbols. This means symbols can form larger versions of themselves, either, 1×2, 2×2 or 3×3, this includes the wild and the scatter symbols too. For players this means bigger potential wins landing, as they are larger symbols and cover more ground so to speak.

Bonus Spins Feature – To trigger the bonus spins round you need to have landed three of the icy bonus scatter symbol. Once you have done this you will be awarded 8 bonus spins to play through. Unfortunately, there is no extra multiplier, but you can retrigger from within the feature. Whilst the spins are in play only one of the female character symbols will be active, which makes landing more of the bonus symbols a little easier to do. Not only that, you will see that mega symbols is still available here as is the ability to retrigger the spins time and again with no limit on the respins.

Renegades is an absolutely intriguing game, with a quirky twist on the lay out of the reels thanks to the mega symbols feature. Overall, the game plays well and wins happen enough to merit further time and money spent on it. If there had been a way to feature stories of the female characters, that would have been a great addition for us. That being said Renegades is still a great game for passing away the time. Bigger wins are found mainly within the bonus and this can take some time to trigger despite the mega symbols being in play. Once there though the feature can retrigger and with the removal of four of the main character symbols, this is a bit easier than when in the main game.