Haven’t most people at some point wondered what it would be like to be a witch or a wizard? We know we have for sure, well now thanks to NetEnt you can get first hand training. Enter the world of the wicca and train at the Witchcraft Academy. A welcoming place for all wannabe witches and wizards to hone their craft! 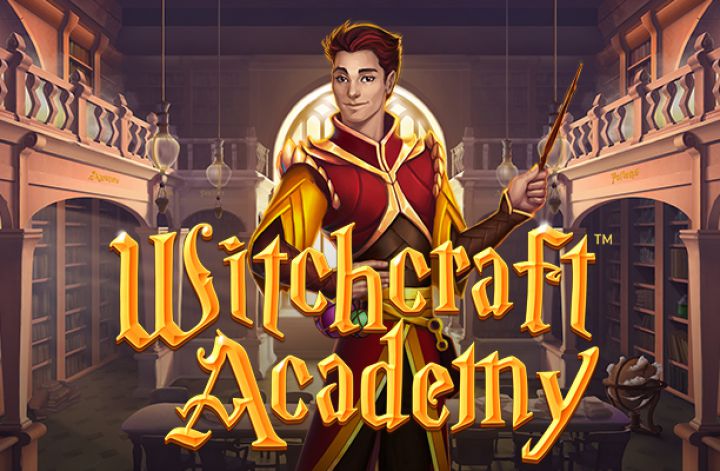 Play Witchcraft Academy on any of these top casino sites;

Witchcraft Academy is a 5-reel, 20 fixed pay line slot that offers a magical RTP of 96.38% to players. The game itself is set in a school library of sorts and the reels spin transparently above the setting, with ghostly goings on happening around such as a floating mop or books. Your symbols are a mixed bag of interesting things including Efora the witch, Earthan the wizard, a dragon and an owl which make up your higher values. Lower values are made up of glass ornamental versions of the heart, ace, club and diamond card shapes. All the way through the game there is an almost mystical tune playing along, it gives a very eerie feel to the game and was actually enjoyable to have playing alongside the reels as they spin.

Bet Amounts – Betting begins at 20p per spin and can be adjusted until it hits the maximum of £40 per spin. As you can imagine there is a lot of scope in between for a range of stake amounts suiting all pockets. Be sure to have selected the correct stake before hitting spin, to do this amend the coin value and the coin level. These are located either side of the spin button and once you have reached your desired stake, away you go.

Wild Symbol – The Witchcraft Academy logo is your wild symbol, it will substitute for all other symbols except the scatter. It will only appear on reels 1, 2, 4 and 5 in both the main game and the bonus game.

Scatter Symbol – Your scatter symbol is actually depicted by the word bonus against a stone background. Land three or more of these to trigger the two-part bonus feature. 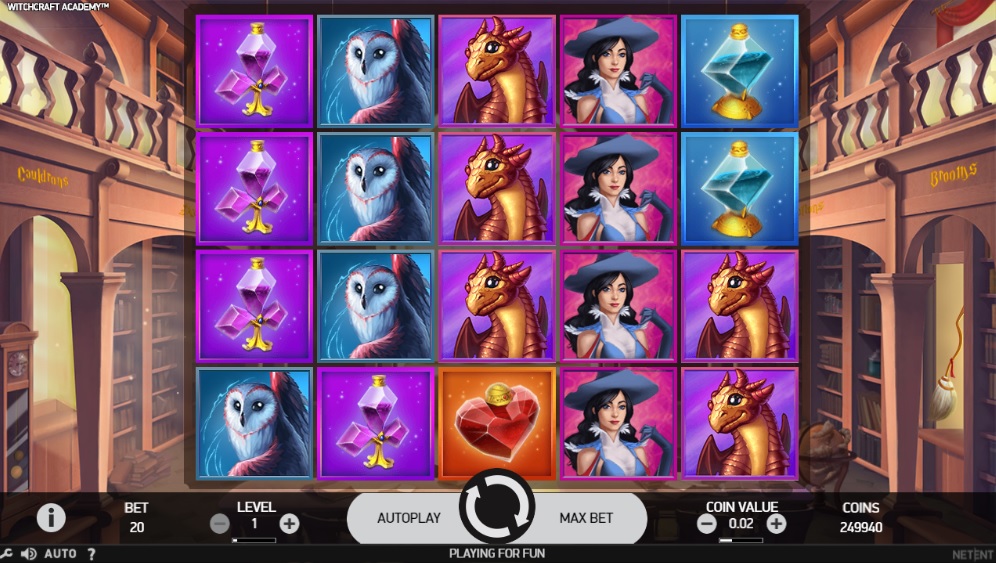 Elements Bonus Feature – In true NetEnt form your bonus feature is super fun and intriguing. Land three scatter symbols anywhere in view to enter the first of a two-part bonus called the Elements Feature. You will be taken to a new screen which will have a chess board laid out and a variety of characters in place on the board. You can pick either Efora or Earthan to fire shots at the pieces on the board. The aim of the game is to uncover x3 scatter symbols in order to move to the elements spins which is part two of the feature. But in your bid to enter part two you will also uncover the following extras:

Elements Spins Feature – Having uncovered x3 scatter symbols when exploding chess pieces in part one, you will enter the bonus spins round. There you will be allocated an initial 5 bonus spins to play through, for every x2 or more scatters you land you will be awarded extra spins as shown here:

During part one of the feature you will have uncovered some extra features that will be active once you enter the second part. Those, alongside the potential extra spins you could receive, can lead to a very lucrative and rewarding round.

Leave it to NetEnt to take an already played out theme and give it a new lease of life. Witchcraft Academy had all the makings of being a slot that could be easily forgotten. But with a touch of magic here and spot of spellcasting there, it has been transformed into an imaginative and entertaining game. The two part feature was certainly a fun twist and we enjoyed every moment spent playing the reels here. Wins come along quite often within the main game however, the bonus game seemed to take forever to trigger. But, when it did, that is where the magic really happened and we kind of forgot how long it took to get us there. Overall if you are into slots for their triggering feature games, you may want to give this a wide berth as it takes too long, but it was certainly fun getting there.