When you combine the emerald isle, rainbows and alcohol, you have the makings of a very messy weekend by all accounts. But if you merge those things together and have the design skills that come from slot developers Just for The Win, then special things happen. Its time to look past the rainbows and see what is in store at the end of the Rainbrew for you! 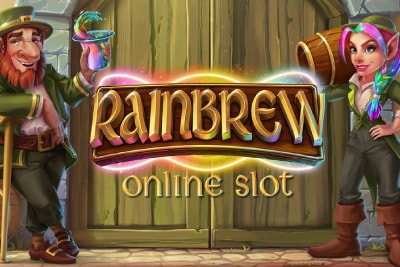 Play Rainbrew on any of these top casino sites;

Rainbrew is a 5-reel, 243 pay line slot offering a magical 96.02% RTP for all you lucky leprechauns playing. With lots of colour and pizzazz on offer, Rainbrew exudes a lucky atmosphere and that’s not just because of the presence of all those leprechauns on the reels either. There appears to be two tubes of lucky juice brewing along nicely across the top and the bottom of the screen. They are called the Sidewinders and they will come into their own during play and bring a bit of extra magic to the game.

Bet Amounts – Betting on Rainbrew begins at 20p per spin and can be increased to the maximum of £100 per spin. Bets can be amended by clicking on the casino chip icon and sliding the spinner until you reach your desired stake.

Wild Symbol – There are x3 wild symbols within Rainbrew, a regular, top and bottom wild.

All three of the wilds substitute for all other symbols except the scatter. The three of them all appear in both the main and bonus game, and they form part of a great feature as shown below.

Scatter Symbol – The Rainbrew logo is your scatter symbol, land 3 or more of these and the bonus spins feature will be triggered. However, land a Rainbrew scatter symbol on reels 2 and 4 to activate the Side Winder feature. 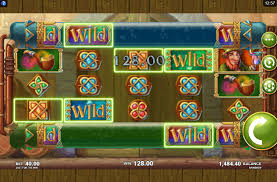 Sidewinder Feature – You may have noticed that during the main game only three rows are active. Above lies the blue tube and below the green tube, these are your Sidewinder tubes and they play a very important role in Rainbrew. To activate the tubes, you will need to land a top wild on reel 2 or a bottom wild on reel 4. Once you have done this the tubes will activate and spin with the addition of more wilds. But activate both at the same time and this is where the magic happens, as your pay lines are increased up to a whopping 1,125 in play!

Bonus Spins Feature – To trigger the bonus spins you will need either 3 or 4 scatter symbols, but the side winder feature can also be triggered with scatter symbols too.

Every time a Rainbrew symbol lands during the bonus round, an additional spin will be added to the total. Land a regular wild in matching positions on the sidewinder tubes to turn the whole reel wild.

What’s not to love about Rainbrew, we dare you to find something as we could not! The game is really clever in design and kept our attentions long after we would normally give up and move on to something else. Wins happened often whether at the lower end of the stakes or the higher end, which means this is a sustainable game for all pockets. We loved the interesting twist of the Sidewinder tubes and the way it was integrated made for great gameplay. Even the backing music was a hit with us and we enjoyed listening to it as we played away. We look forward to seeing more from the Just for The Win vault, but until then we are going to enjoy Rainbrew to its fullest.

April 26, 2018 Boku Slots Comments Off on Elements the Awakening