Whenever you think of the word Bonanza, it immediately conjures up images of old American western TV programmes. Thankfully the Bonanza Slots game Boku Slots is bringing you in this review, has nothing to do with an iconic show. Instead within this amazing slot developed by Big Time Gaming, you’ll find yourself digging for treasure in the form of gem stones.

Play Bonanza on any of these top casino sites;

Bonanza is a 6-reel, 117649 pay line slot and yes you read that pay line amount correctly. Not only that but the RTP on this game is a very tasty 96%, which when you consider the amount of ways that a win can be achieved is fantastic. It also plays on the premise of a cascade effect, so any symbols included in a winning line will be removed and new symbols will drop into their place; potentially creating more wins.

Bet Amounts – Betting begins at 20p per spin and can be increased to £20 per spin if you so wish. The value for money here is insane, 20p for 117649 lines in play! You are probably wondering how this works, so we’ll provide a little more detail. Firstly it’s down to the scrolling symbols that are across the top of the screen, giving you 7 symbols to match instead of the 6 it would normally be. Then on top of that the pay lines are paid left to right, as long as the symbols are on an adjacent reel; this is including the additional top row too. It means that the wins will happen more often than if you had to match them in a consecutive row, as you would do in regular slot games. 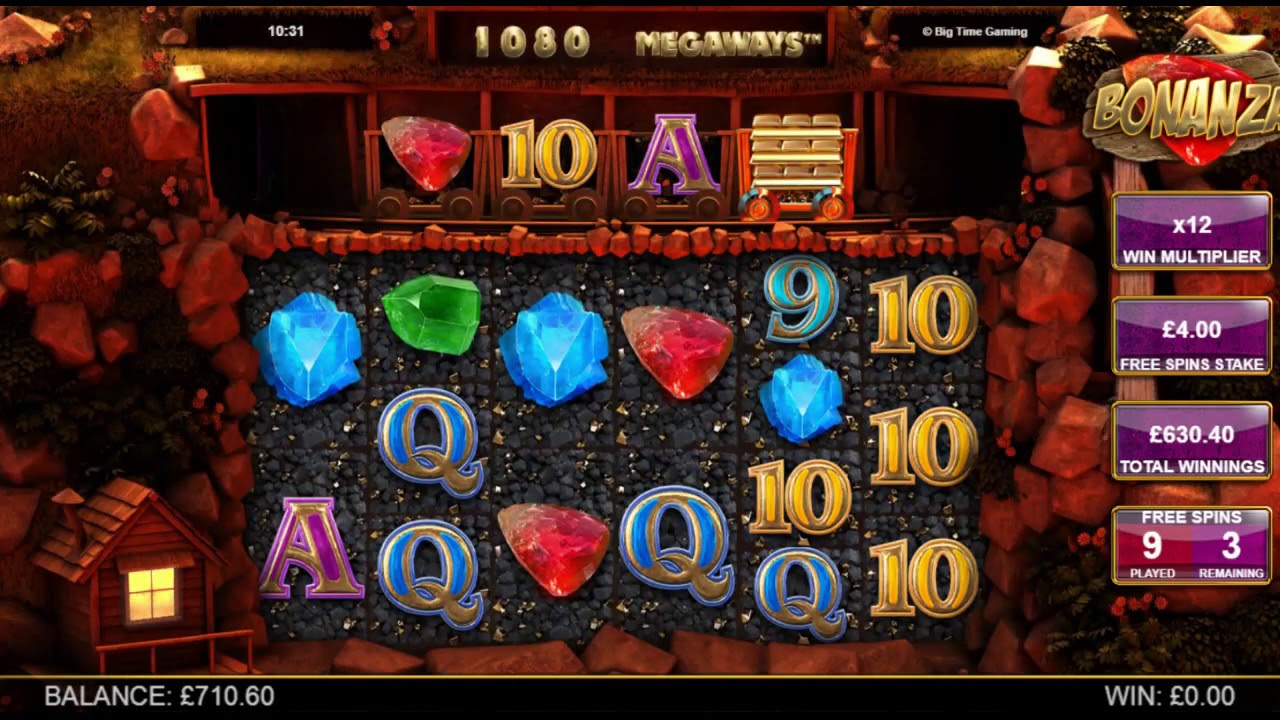 Wild Symbol – The wild symbol is your sticks of dynamite, they substitute for every other symbol except the scatter.

Scatter Symbol – You have four scatter symbols within Bonanza. They are the letters G.O.L.D and if you land all four letters across the reels during a spin you will trigger the bonus spins feature.

Other Symbols – Paying symbols include a diamond, ruby, amethyst, jade, ace, king, queen, jack, 10 and 9 in order of highest to lowest paying.

Carts Feature – At the top of the reels you will see a mine cart travel across on each spin. The cart is four reels wide and will add an extra symbol to the four reels it stops above. This is what increases your pay line options and it is a welcome addition to the slot gaming fun.

Bonus Spins Feature – Once you have triggered this by landing all four of the scatter symbols on the reels, you are allocated with 12 bonus spins. During this time any additional scatter symbol that lands will award you with an extra 5 bonus spins, which will be added to your spin amount.

Well, we don’t know about you, but we were intrigued by the 117649 pay lines. Then we read further into it and were amazed. Bonanza Slots is really easy to play and affordable for anyone wanting low cost betting and for those wanting to splash out a bit. Combine this with the regular wins that can be achieved with so many pay lines in play, plus great graphics and you won’t want to play anywhere else.