Snowy landscapes, polar bears and ice castles are all present in this next slot. The game itself is developed by Tom Horn Gaming who are based in Slovakia and whom are a slot developer we haven’t come across before. Frozen Queen is a great looking slot that offers an interesting bonus feature, so let’s provide you with a little more detail as to what you can expect.

Play Frozen Queen on any of these top casino sites;

Frozen Queen is a 4-reel, 81 ways to win slot that offers an RTP of 96.56% to intrepid explorers of this cold landscape. Your reels look like blocks of glowing ice that are suspended above a wintery mountain scene, with snow falling in the background. The Frozen Queens castle lies off in the distance to the left and the symbols are packed with animals you would find living amidst this habitat. Higher paying symbols include the Siberian tiger, polar bear, arctic wolf and a snowy owl all beautifully drawn to a high standard. Lower paying symbols are the A, K, Q and J which look like they have been carved from ice and edged in gold. There’s an almost ethereal sound tinkling along as the reels spin, which lends a certain feel to the overall atmosphere of the game.

Bet Amounts – Betting begins at just 10p per spin and can be increased up to £100 per spin. The bet amount is nestled between the win amount panel and the number of wins in play. There are symbols beneath the bet amount which allow you to increase or decrease your bet until you are ready to continue playing the game.

Wild Symbol – The wild symbol in frozen queen also serves as the scatter and is a blue crystal. In relation to its capabilities as a wild symbol it will substitute for all symbols in the game. Read on below to find out how it works as a scatter.

Scatter Symbol – As mentioned above the blue crystal acts as a scatter as well as a wild symbol. If you land x2 crystal symbols on the reels you will trigger the bonus spins feature. The crystal scatter/wild can land anywhere on the reels. 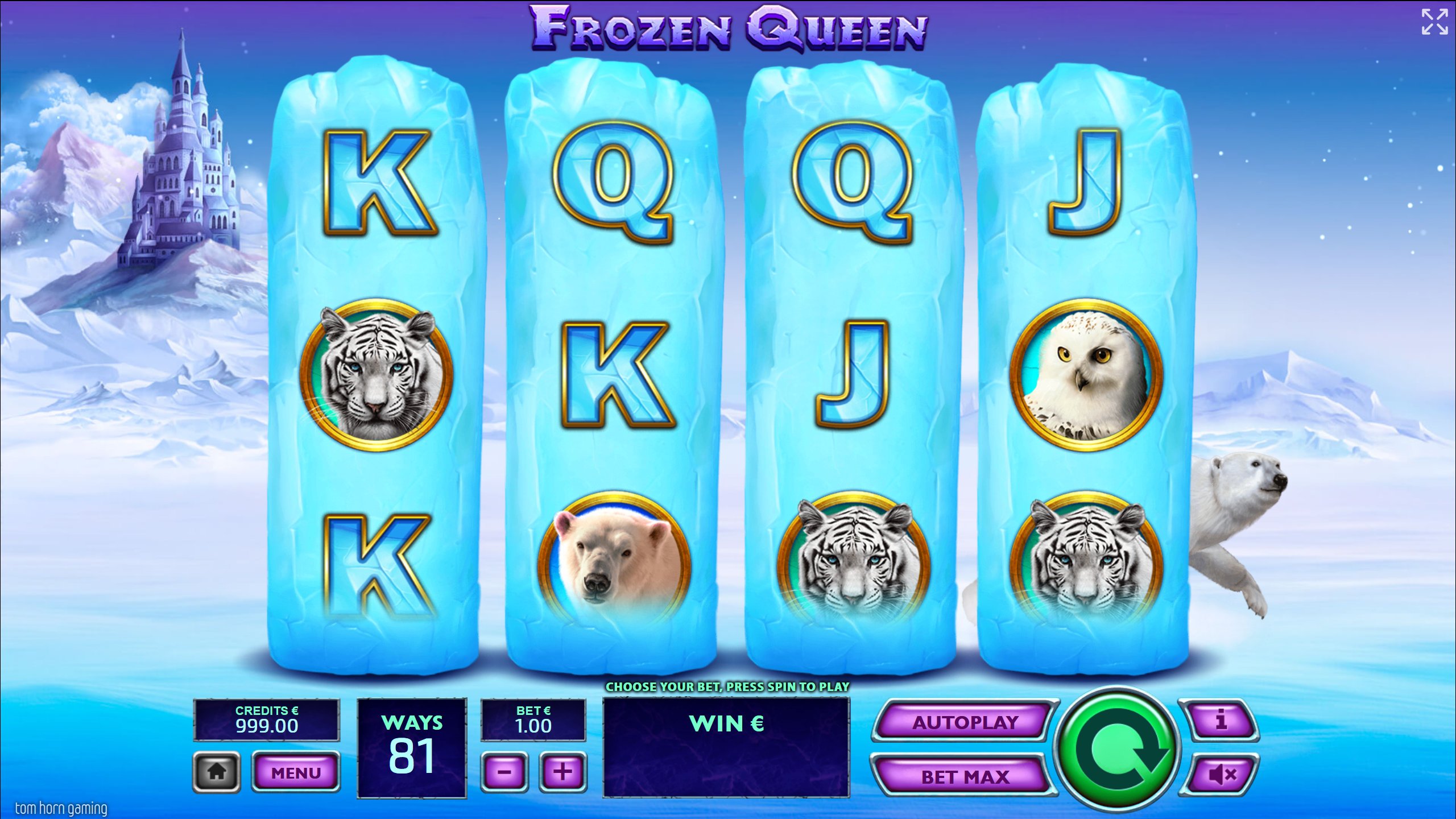 Frozen Queen Wild Feature – Only available within the bonus spins feature, the frozen Queen wild is an interesting addition to the game. She will act as a sticky wild and will take up the centre position of the reels. In doing so she is creating a fifth reel and increasing the ways to win from 81 up to 243! She will remain in place until the whole of the bonus spins round has been played through. When this is done, she will vanish from the reels completely. Turning the game back to a 4-reel and 81 ways to win slot until the feature is retriggered.

Bonus Spins Feature – To trigger the bonus spins feature you will need to land x2 of the blue crystal scatter/wild symbol anywhere in view. Upon doing so you will be awarded with 10 bonus spins to play through. The Frozen Queen sticky wild feature will immediately activate on entering the bonus spins round. Once the queen wild reel is in place, she will substitute for all other symbols and aid in completing any potential wins on the reels. The crystal scatter/wild is not in play during the bonus round which means it cannot be retriggered. However, the wild/scatter lands relatively often in the base game and to trigger the feature you only need 2 in view. Meaning you trigger the bonus spins frequently enough from the base game to forgive the fact it can’t be retriggered during the feature.

Frozen Queen is a basic but enjoyable slot game, its almost reminiscent of fairy tales and movies we have all seen growing up. But with one subtle difference, the fact you can win money with this queen and don’t end up enslaved or worse! Despite only having the one main feature, the playability of the game isn’t affected. We think this has to do with the fact that the blue crystal symbol doubles up as a wild and a scatter, but also because it lands regularly. Thus, triggering the feature more often than you would expect it too. Main game wins occur often as well, meaning that even if the feature didn’t trigger you would still find some profit in the game itself.