In order to meet this next character, you will need plenty of bananas and patience as you don’t want to set him off. Join us and the team at NextGen Gaming as we attempt to tame this creature in Gorilla Go Wild. He has access to the Aztec riches and in order to pry it away from him we need to be clever and switch it out for bananas, hopefully he won’t notice! 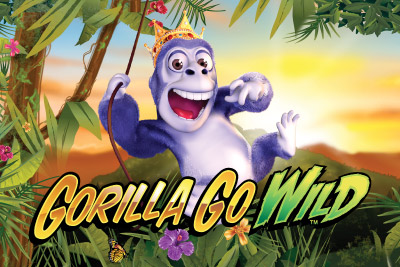 Play Gorilla go Wild on any of these top casino sites;

Gorilla Go Wild is a 5-reel, 25 fixed pay line slot offering a variable RTP of 92.06% to 96.51% for players. Your reels are set deep inside the jungle, with an Aztec temple off in the distance and the reels spinning transparently against the backdrop. Gary the gorilla sits to the left of the reels with a row of yellow bananas above his head. You will see Gary move every so often as certain features trigger and as he reaches up to eat the bananas above him.

Symbols on Gorilla Go Wild include various jungle animals and there is a mix of card symbols thrown in too. Higher values are the gold coin, purple chimp, a toucan and a lemur, with lower values being the A, K, Q, J, 10 and 9 symbols. As the reels spin you will hear the beat of jungle drums and occasionally the screech of birds; there’s even the grunts of Gary the gorilla too.

Bet Amounts – Betting on Gorilla Go Wild begins at 30p per spin and can be increased up to the maximum of £150 per spin. In order to adjust your bet, you will need to use the arrows on either side of the coin stack found just below the spin button.

Wild Symbol – Gary the gorilla is your wild symbol in Gorilla go Wild and he will substitute for all other symbols except the scatter.

Scatter Symbol – The Aztec temple is your scatter symbol on Gorilla Go Wild and it can land on any of the reels. Landing three or more of the scatter symbol will trigger the feature.

Gary’s Bonus Feature – Triggering at random after any spin, the Gary’s bonus feature offers a multitude of extras. The first feature that you could bag yourself is the prize multiplier and this is the one that triggers the most often. It offers between x50 your bet and x1000 your bet as an instant win and you will see Gary grab a pot of gold and chuck it about. Gary’s bonus feature may also trigger any of the bonus spins features shown below, but these trigger much less often than the multiplier. 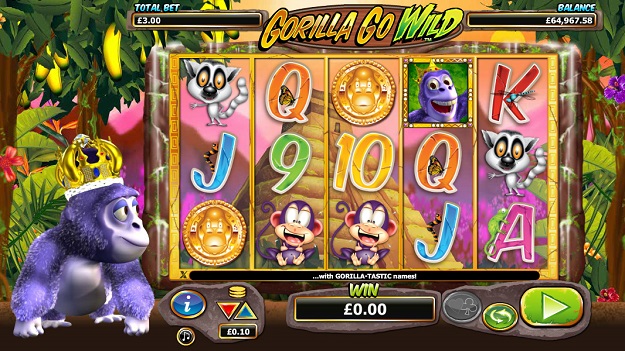 Gary Goes Bananas Feature – After any paid spin you may see Gary reach up and eat a banana from the stack above his head. Once he has munched his way through all the bananas, the screen will change as he moves to another part of the jungle. Every time Gary moves, the chances of triggering the Gary’s bonus feature increases meaning it lands more often. Gary can advance three times to three different sections of the forest.

Bonus Spins Feature – In order to trigger the bonus spins feature on Gorilla Go Wild, you need to either land three or more of the Aztec scatter symbols anywhere in view. The other way to trigger the feature is via the Gary’s bonus feature. Upon triggering the feature, you will be given the choice of the following spin features. However, each feature only becomes active after the bonus spins has been triggered a certain number of times. All the details are shown below including when the individual feature triggers and what is involved when it does!

Once you have more than one feature activated, you will then be given a choice of which feature you want to play when entering the round. All of the feature options can be retriggered once from within the round.

Gorilla Go Wild is a fun and engaging slot that really excites the player as the game progresses. The bonus features trigger relatively slow at first. But the further that Gary the gorilla goes through the jungle after munching his way through the bananas, you will find that they trigger much faster! It does mean investing a little time into the game and sometimes this can be less lucrative than you want it to be. Waiting game aside once you do enter the features, they prove to be very profitable and certainly worth the wait.