When you hit upon a slot named Imperial Riches, it’s almost impossible not to enter and see what is on offer. We love the far east themes bandied about by most if not all online slot developers and this latest one is from the libraries of NetEnt. Filled with lush imagery, bright graphics and some intriguing features, we are sure that Imperial Riches will hit the spot for all who enter and play. 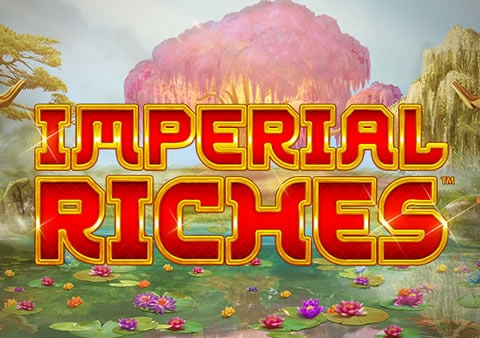 Play Imperial Riches on any of these top casino sites;

Imperial Riches is a 5-reel, 15 fixed pay line slot offering an RTP of 96.88% for players. It is set inside what appears to be a luxurious pagoda style villa, complete with koi pond in the centre. The reels themselves take centre stage, with the jackpot prizes just above them as a constant reminder of what could be won.

Symbols range from typical far eastern themes such as koi and gold coins, to the usual card symbols. Higher paying symbols are depicted by a golden koi, gold rice bowls, gold coins and a bamboo plant. Lower paying symbols are depicted by the A, K and Q found in playing cards, but designed here in oriental font to tie in with the game. As the reels spin there is a beautiful music track playing along, giving an almost relaxing feel to the game.

Bet Amounts – Betting on Imperial Riches begins at 15p per spin and can be increased up to £30 per spin. To amend your bet you can change the bet level and the coin value. These are found on either side of the spin button and have plus and minus symbols on them to help you alter the amount. Use those symbols until you reach the desired bet showing and then hit spin to resume play.

Wild Symbol – A golden gong is your wild symbol in Imperial Riches. It will substitute for all symbols in the game except the scatter. The gong wild will appear in the main and bonus game, but it will only land on reels 2, 3 and 4 in both.

Scatter Symbol – Your scatter symbol on Imperial Riches is a red and gold lantern and it will land anywhere on the reels. Landing three or more of the lantern scatter symbol will trigger the bonus game for you.

Avalanche Reels Feature – If you haven’t played a game that has avalanche reels active before, then you are in for a treat. Every time a winning combination is formed, those symbols making it up will be removed and new ones drop into their place. If those new symbols create a win, they too will be removed and the process repeats. This only ends once no new matches are made from the symbols dropping into place. It is a great addition to any slot as it gives players the chance of landing multiple spins from a single paid spin! 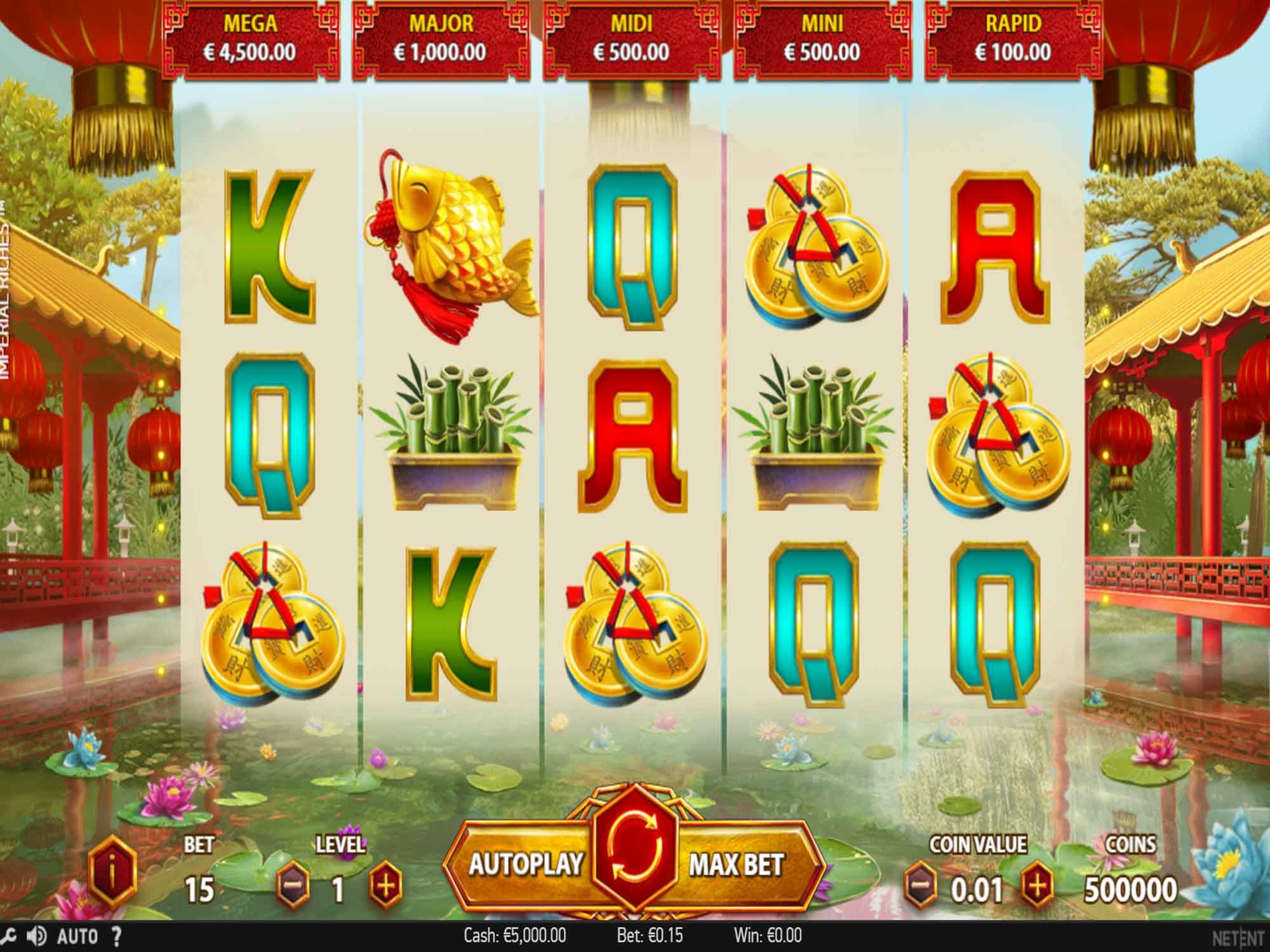 Lucky Pond Jackpot Feature – If you were lucky enough to land some wins during the bonus spins feature, then you will enter the lucky pond feature. Here you will see two fish in the pond, the blue bonus fish and the gold coin fish. All of the jewels and coins you accumulated during bonus spins will now drop into the pond. If either the jewels or coins land on the fish, they will be collected and you will be awarded a multiplier for your coins. If you collect three jewels on the bonus fish, you will enter the jackpot feature where you have a chance at winning one of the five jackpots on offer.

Jackpot Feature – This is similar in nature to the lucky pond feature in that it is set inside a pond, but now there are six fish for you to play with. Each of the fish has its own jackpot win attached to it as shown here:

To win any of these prize pots you need to collect three jewels matching the colour of the fish that is representing the prize. You will see jewels dropping from the top of the screen, these are the same jewels which you accumulated during the bonus spins feature. This means however, that after playing the lucky jackpot feature, there is a chance you may run out of jewels before a jackpot match is reached.

You will see three spaces below each of the jackpot prizes and watch as they fill up. If you run out of jewels before filling up one of the five jackpot prizes, then you will be awarded the coin win shown at the bottom right corner of the feature screen. This coin amount will have been increasing as the feature played out, with the golden fish adding x20 or x40 coins to the pot each time it eats one of the jewels or coins.

On entering Imperial Riches, it doesn’t seem to have that much going on. But that is because NetEnt has hidden all of the games glory within the bonus features, including the avalanche reel feature. This in itself gives you an opportunity to land wins, but then the extras kick in. It actually flows really well once you get into the bonus spins, leading you into the Lucky Pond and then onto the jackpot feature. Main game wins land relatively often, which is obviously what draws the players back to Imperial Riches time and again.