Join us as we embark on a trip with NetEnt in search of the mysterious Wild Turkey tribe. Revolving entirely around an ancient tribe of, yes you guessed it, turkeys. This game promises to be a wild ride and hopefully full of lots of treasures along the way!

Play Wild Turkey on any of these top casino sites;

Wild Turkey is a 5-reel, 20 fixed pay line slot offering a tempting 96.6% RTP for players. It is set on a tropical island far away, with the reels spinning transparently against the tribal village scene behind. Your reels are filled with the turkey villagers and stone carvings which make up your symbols. In the background there is a distinctive tribal beat playing, almost as if the tribe is marching ever nearer to your current position. It really lends a great atmosphere to the overall feel of the game.

Bet Amounts – Betting on Wild Turkey begins at 20p per spin and can be increased up to the maximum of £100 per spin. To adjust your bet you can change the bet amount found to the right of the spin button and the bet level found to the left. Use the arrows on either side of those options to increase or decrease your bet amount, which can be seen under the spin button itself. Once you are happy with the bet amount showing, then just hit spin to carry on playing at that level.

Wild Symbol – A carved totem image of what we assume is also a turkey makes up your wild symbol in Wild Turkey. It will substitute for all other symbols in the game, yes that correct, every single one! But it also doubles up as your scatter symbol too, so read on below to find out how that works.

Scatter Symbol – As mentioned above your wild symbol is also your scatter symbol. This means you will need to land three or more of the wild/scatter anywhere on the reels, in order to trigger the feature.

Other Symbols – Your symbols on Wild Turkey are superbly drawn and given lots of character. Higher paying values are depicted by the five turkey villagers, all with varying different tribal outfits in red, orange, green, blue and brown. Your lower paying values are the usual card symbols A, K, Q, J and 10, but carved in stone and decorated to make them pop out on the reels. 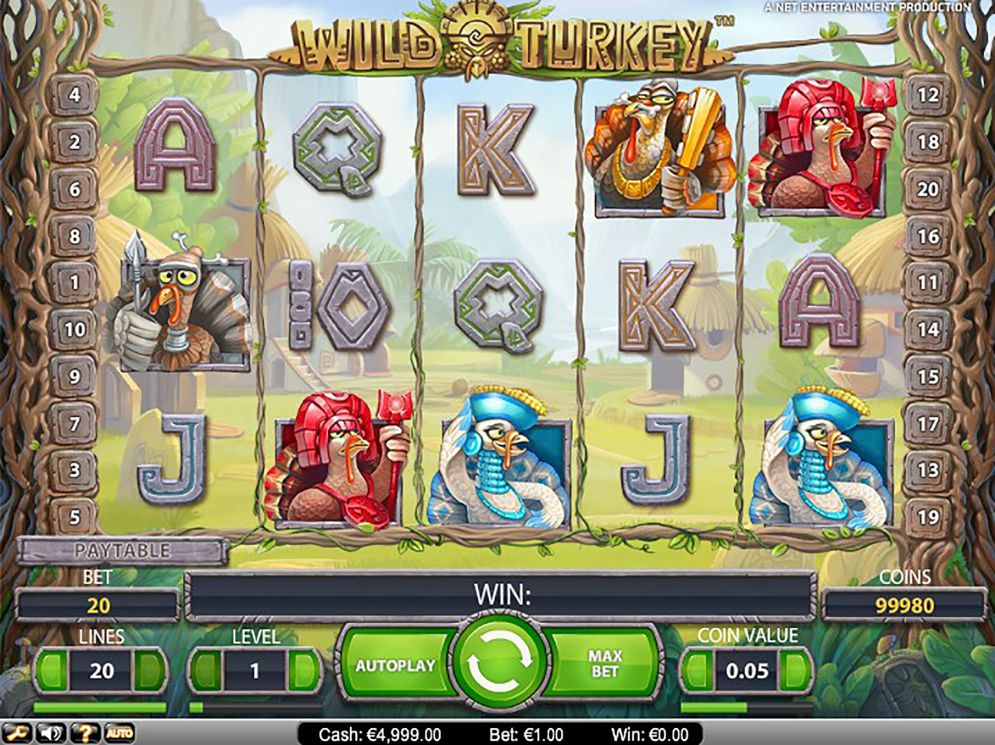 Bonus Spins Feature – Land yourself three or more of the wild/scatter symbol and you will find yourself entering the bonus spins feature. You will now be allocated your bonus spins which are dependent upon the number of wild/scatters present upon triggering.

Whilst the bonus spins are in play, your wild/scatter symbol becomes a stacked symbol for the duration of the round. If you land a stacked wild on any spin during the bonus feature, you will have x2 extra spins added to your total. This is a great chance of extending your spins further as there is no other way to retrigger the round from within it.

Wild Turkey is certainly a game to keep players coming back for more. With the promise of x60 bonus spins and the added bonus of extending that further, you can see the draw of the game. Before we get to the fun of the feature though let’s talk main game wins. We found that they happened frequently enough, but usually towards the lower end of the pay scale with the odd injection of a bigger prize pot. Thankfully though this can be overlooked as the wild symbol is also the scatter, meaning more chances of it landing and thus triggering the feature as opposed to having to wait for a separate scatter to land.

Overall the game brought us plenty of enjoyment but fair warning, betting at the higher level on a frequent basis will of course bring the bigger prize pots! However, with the way the reels seem to be landing it could be quite taxing on your balance. Our advice would be to bet mid to low range, because you will still have as much chance of triggering the feature, as if you were betting high. But at least your balance will be able to sustain longer gameplay this way. Obviously, the choice is yours, but we found this the best way to play Wild Turkey and still glean the enjoyment factor from it.