Elk Studios have taken the Ocean’s Eleven theme and given it a little twist, with slick graphics and game play. Welcome to the shady underworld of Lakes Five, where you can join Mr Lake the moose and his cohorts as they commit the ultimate heist on Mr Romano’s tower. 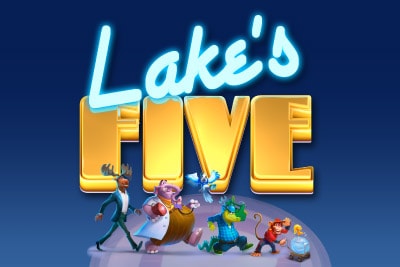 Play Lakes Five on any of these top casino sites;

Lakes Five is a 5-reel, 178 pay line slot offering a heist worthy RTP of 96.3%, for all who want to join the gang. With transparent reels that spin against a bustling city back drop, where the next target for the Lakes Five gang lies. Symbols in the game include the Lakes Five characters, diamonds and a safe cracking kit.

Bet Amounts – Betting begins at 20p per spin and can be increased to £100 per spin, if you stick to a no betting strategy that is. In Lakes Five there are four other betting options available and we have simplified them for you below:

Wild Symbol –  Elk Studios has given a bit of a twist to the wild symbol, as it also doubles as your scatter too. It will substitute for all other symbols within the game and is a key part to triggering all the bonus games. 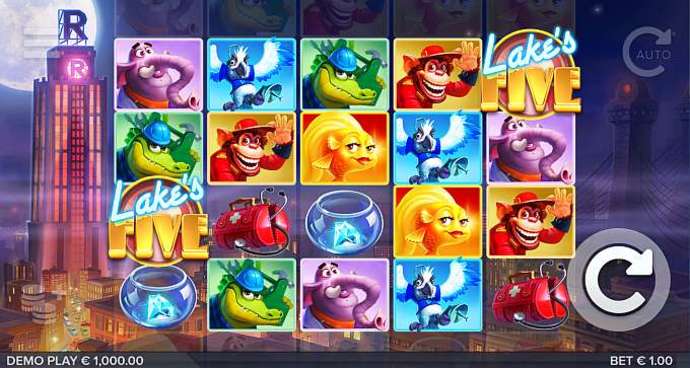 Wild Respins Feature – Land yourself two of the Lakes Five symbol anywhere on the reels and you will trigger the respin feature. The reels will respin until they have less than two wild symbols in view. This means the spins could potentially carry on for some time.

Heist Bonus Feature – To trigger this feature you need to land five of the Lakes Five wild symbol anywhere on the reels. Here you will receive 10 bonus spins to begin with, but every time a gold key lands on the reels you will receive one more spin added to your total. Those keys have another function though too aside from awarding extra spins. They only land on reels 1, 3 and 5, and if you manage to land three keys on either of those reels, you get a little extra surprise as shown below:

You may find with these extra’s that you end up with wilds landing on the same position as another wild, as they move across the reels. If this happens you will be allocated a special multiplier for that line win of x2 or x3 the bet amount. On the last spin of the reels, all wilds that are still in view from the feature will move off the reels. As they move off they will turn all symbols they touch completely wild in their wake and your final wins are calculated.

Lakes Five has blown us away, and not with dynamite intended for the safe. The game is busy, bright and fun to play. Elk Studios have obviously put a lot of thought into it, and it shows. Wins happened often and when we did trigger those bonus spins, we were amazed at the way they went in our favour. We were a bit unsure of the whole wild/scatter combination symbol, as it doesn’t always work well. But not here, in fact it worked better than we thought it would.

December 19, 2018 Boku Slots Comments Off on Deck the Halls

Anchorman: The Legend of Ron Burgundy

December 17, 2018 Boku Slots Comments Off on Anchorman: The Legend of Ron Burgundy