Just for the Win are a development team that have created a niche for simple yet playable slot games. Lucky Links is one such game and incorporates a very interesting single feature to keep things fast flowing for players. 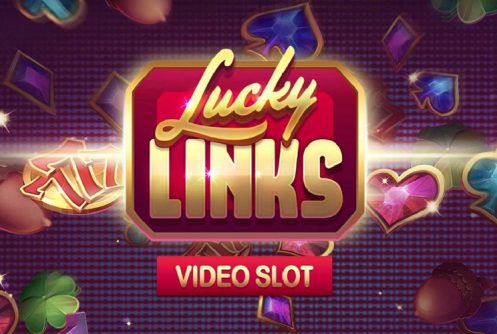 Play Lucky Links on any of these top casino sites;

Lucky Links is a 5-reel, 20 fixed pay line slot that offers players a 96.10% RTP. Set in a basic 5×4 layout, the reels are bright and colourful enough to grab your attention. There is quite an uplifting music track playing along as the reels spin and it fits really well with the overall game, considering there isn’t any theme as such running through it. Symbols range from luck related items such as clovers, to card suits drawn like gemstones. Higher value symbols are the Lucky Links logo, the triple 7’s, horseshoe, acorn and 4 leaf clover. With lower values being the spade, heart, club and diamond gem stone shapes.

Bet Amounts – Betting begins at 10p per spin and can be increased up to a mammoth £250 per spin if you so choose! To change your bet, click the casino chip symbol and adjust the slider. Once you are happy with your selected bet just hit the spin button to get started again.

Wild Symbol – You may notice the distinct lack of a wild symbol in Lucky Links and this is by no means a transgression on Just for the Wins part. They very often remove the wild symbol in place of a nifty trick and with Lucky Links this is explained below.

Scatter Symbol – As mentioned above Just for the Win like to stir things up a little, so there is also no scatter symbol in Lucky Links either! Well how do you trigger the features we hear you gasp? Read on below to find out more.

Both Ways Win Feature – We promised you there would be something to replace the missing wilds and scatters. Well, here it is, because when a win lands it will pay from left to right and vice versa. Yes, that’s right your win lines pay in both directions when they land.

Lucky Links Feature – Now this is a very interesting way to add a feature, without it needing to be triggered by a symbol. On every spin a random symbol will be selected and have a gold frame surround it. If one or more symbols land on the spin and connect in a horizontal position, then you may be in with the chance of linking even more symbols and creating bigger wins. If more of the same symbol line up horizontally, they will then connect and become linked and held in place whilst the reels remain spinning.

Once the reels have finished spinning, all connected symbols will remain in place for another respin. If any more symbols connect to the current link, they will lock in place and another respin will be awarded. This will continue until no further symbols connect to the current link, or all reel positions become linked leaving no new space. Obviously if the latter happens you are in for a potentially big win with the whole screen being linked together.

The really good thing is that during the respins, wins can be landed in the usual way too, not just as part of the Lucky Links feature respins. Just another way of giving you that little extra something, in place of those missing wilds and scatters.

Lucky Links is a game that could be seen as dull when you take a first glance at it. But it becomes highly playable once you realise the high chances of triggering the lucky links feature. The gold frame appears on symbols on almost every spin. It doesn’t always trigger the feature, as the symbols must connect on the horizontal first. But that’s not to say it doesn’t happen often, because the feature triggers regularly and brings an added bonus. As the reels respin it’s not just the Lucky Links that bring you wins, you can still land normal win combinations too! Combine this with the both ways win feature and the cool sound track, and Just for the Win have created a winner in our eyes.