In fairy tales all over the world we are warned about the dangers of trolls; big scary trolls. But put those fear behind you because it’s time now to turn the tables. Join forces with us and Yggdrasil Gaming as we attack the trolls castle and attempt to steal away the riches hidden within the walls. It is time to cross the battlefield and play Trolls Bridge and teach those scary trolls a lesson! 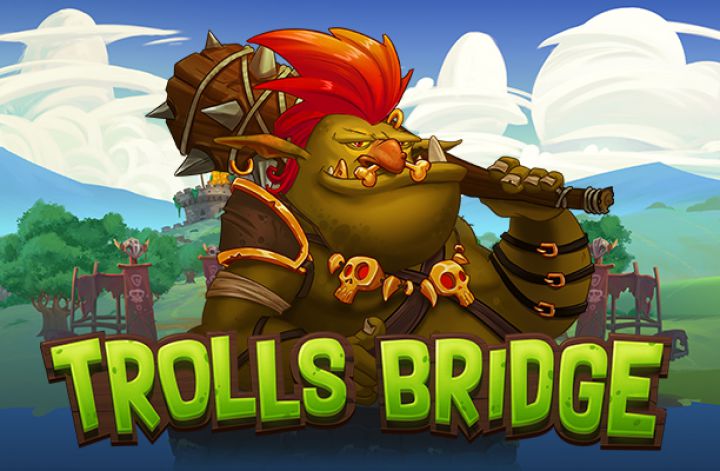 Play Trolls Bridge on any of these top casino sites;

Trolls Bridge is a 5-reel, 20 fixed pay line slot that offers players an RTP of 96.3%. As the game begins you see the trolls castle off in the distance and the game flashes forward towards their garrison and the bridge surrounding it.

Symbols include a variety of troll characters and card suits, as well as various other theme related items. Higher paying symbols are the trolls in red, purple, green and blue, with lower paying being the heart, spade, club and diamond symbols found in playing cards. There are some interesting sound effects that come into play whilst the reels spin and they work well with the energetic music that is in the background.

Bet Amounts – Betting on Trolls Bridge begins at 20p per spin and can be increased up to £100 per spin. In order to change your bet, you only need to amend the coin value. Use the plus and minus symbols on either side to adjust your total bet amount, until you are satisfied with the total.

Wild Symbol – A wooden emblem with the word wild carved into it is your wild symbol in Trolls Bridge. It will substitute for all other symbols except the scatter and there are 4 variations on this wild symbol throughout the game. The first wild is advised above and can land on any reel in the base game or the bonus spins. All 3 of the other wild variations are only available as part of the bonus spins feature and include a sticky wild, random wild and troll wild. Each one has its own individual function and despite being similar in design to the main wild, they each have their own style. You will see that the sticky wild has a burning torch on it, random wild is surrounded by clouds and the troll wild has a troll’s face on it.

Scatter Symbol – Your scatter symbol in Trolls Bridge is a gold skull and crossbones. Land three or more of the scatter anywhere on the reels in order to trigger the feature.

Trolls Pot Feature – Triggering at random in the base game only, the trolls pot will only land on reel 5. When it does it will award one of the following bonus spin or instant win coin prize amounts.

Fire Ball Feature – Again triggering at random in the base game only, the fire ball will launch across the reels. The prizes on offer in this feature are dependant upon whether you had a winning spin or a losing spin! 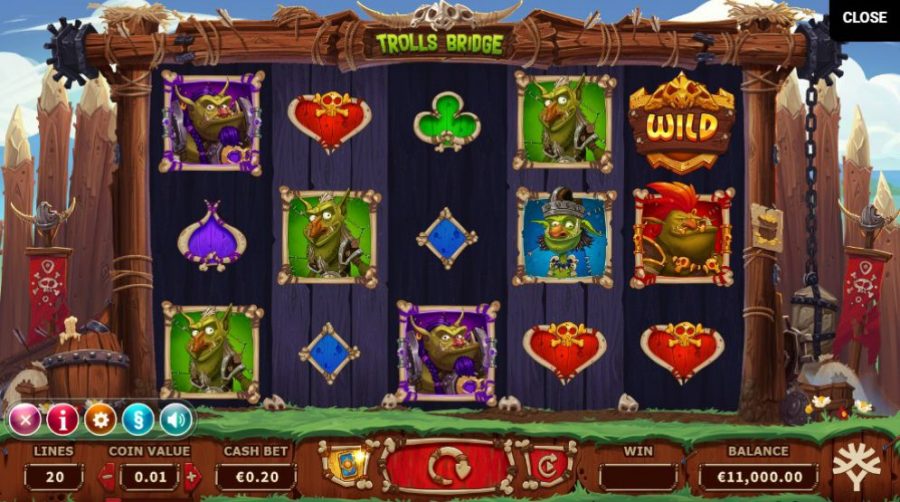 Bonus Bet Feature – At the side of the spin button on Trolls Bridge you will see a gold symbol with a ticket on it. This is your bonus bet feature and when activated it will allocate x1 extra feature pick in the bonus spins. The feature picks are allocated depending on how many scatter symbols you had when the feature triggered. This gives you the addition of 1 extra pick, but it will cost you extra to have it activated. The charge for activating the bonus bet is 25% of your current base bet, meaning if you are betting at the top range of £100 it will add an extra £25 on top of your bet.

Bonus Spins Feature – Land three or more of the scatter symbols anywhere on the reels to trigger the bonus spins feature in Trolls Bridge. You will be allocated a number of spins and something called a feature pick, which depends on how many scatters were in view at the trigger.

Once your spins and picks are decided, you will be taken to the first screen to make your choice of the feature picks available. There are many options to choose from but they are all hidden behind cards, so you’re picking at random but here is what they offer:

You can’t retrigger the bonus spins from within the round, but you can activate the bonus bet as described above to gain an extra feature pick.

Trolls Bridge is a very clever slot that offers players some interesting bonus features. We like the fact that you can enter the bonus spins round from triggering a scatter, or by landing the trolls pot symbol on reel 5. The random bonus fireball is also an interesting addition in that it triggers on both winning and losing spins instead of one or the other. Yggdrasil Gaming have really taken the player into account here and given them as many options as possible to get those wins landing. Main game wins happen as often as you would want, though they do tend to be at the lower end of the pay scale. But that can be forgiven as the bonus features all trigger easy enough and that’s where the bigger money lies for all. With regards the bonus bet on Trolls Bridge, it may be tempting to grab that extra feature pick as a guarantee, but in our honest opinion it isn’t needed. Even with the lowest feature pick of three, you are still looking at some pretty big helping hands. Of course, if you want to choose to pay an extra 25% on your bet amount on every spin that is your choice, but you will soon burn through your balance this way.