The fiery pits of hell are the location of our next slot, as we descend into the underworld with Microgaming leading the way. Hot as Hades is named after the god of the underworld and it is in this realm, we play our slot. You will see Hades and his three headed dog Cerberus wandering around the reels, which we found pretty quirky. 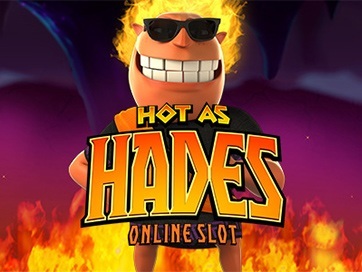 Play Hot as Hades on any of these top casino sites;

Hot as Hades is a 5-reel, 20 fixed pay line slot offering players a sinfully great RTP of 96.75%. Flames lick away at the reels as they spin and Hades potters about doing random actions. Symbols range from a plethora of characters, to the normal card denominations found in most slot games. Higher value symbols are Hades, Zeus, Poseidon, Medusa and Cerberus, with lower values being the A, K, Q, J and 10 card symbols. There is an almost ominous sounding backing music which we quite enjoyed.

Bet Amounts – Betting on Hot as Hades begins at 20p per spin and can be increased up to £100 per spin. There are two ways to adjust your bet, the first being direct from the screen with the plus or minus signs. The second option is to hit the arrow at the corner of the bet amount, and it will expand upwards giving you the choice of changing the coin size and coins value. This is a somewhat quicker way to get to your required bet amount. Either way, the outcome is the same, it just really depends how fast you want to get there.

Wild Symbol – The Hot as Hades logo is your wild symbol and it will substitute for all other symbols except the scatter. Any wins that are formed with the help of the wild symbol will be awarded a x2 multiplier.

Scatter Symbol – A crystal skull is your scatter symbol in Hot as Hades. Landing three or more anywhere on the reels will trigger the bonus feature. Scatter wins are also in play here, offering an extra win on top of your line bet for landing 2 or more scatters anywhere on the reels. 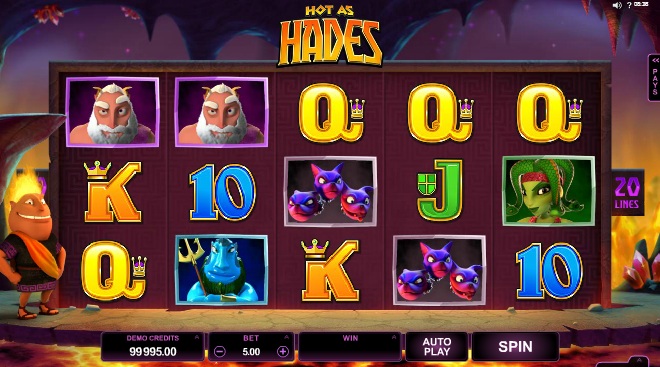 Super Mode Feature – Triggering randomly, Super Mode is your bonus spins feature. This is a different approach to the bonus spins round than you would normally see triggered by a scatter symbol. But, wanting to shake things up a bit, Microgaming thought they would do it here, after all Hades is well known for breaking the rules.

Crystal Skull Feature – Land three of the crystal skull scatter symbols anywhere on the reels to trigger the bonus feature on Hot as Hades. You will now enter a picking game where Hades must go through 5 different zones. Each of the first 4 zones is manned by one of the other four characters. Beginning with Cerberus, leading to Medusa, then to Poseidon and finally Zeus. If you pass Zeus you will enter Olympus to be in with a chance of picking from one of the treasures found there.

In each zone you will be given the choice of objects to pick from, you only get one pick so choose wisely. Each one has either a cash sum behind it or a block symbol, picking a block symbol will end the round and return you to the game. Reveal a cash sum however and this will be added to your winnings and you will travel to the next zone. If you make it all the way past Zeus you will enter the final stage which is Olympus. Here the cash prizes are bigger and instead of a block symbol there is the crystal skull. Reveal the skull to win every prize behind every object inside the Olympus level.

Hot as Hades is super fun to play, the fact that Microgaming have switched things round makes for a different kind of gameplay. Normally you would need three scatters to trigger the bonus spins in most slot games. But instead they trigger randomly at any point and the scatter launches the crystal skull feature game. The crystal skull pick a choice game for the bonus feature is engaging too and creates a lot of player interactivity. Our only negative when it comes to the way that the features trigger, is that it can take some time for those bonus spins to activate. Whereas the pick them game tends to trigger more often. That being said because the quest pick game triggers as often as it did, it made the wait for the bonus spins that bit more bearable. Main game wins happen fast enough too, so that combined with the features makes Hot as Hades hugely popular across the board!