In history it is mostly kings that ruled the castle but not in this next slot from NextGen Gaming. Here in this realm we have a Queen of the Castle and she wants to share her wealth with everyone in the kingdom. So, it is time to step inside the castle walls and see what riches you can find by spinning the reels and triggering some very interesting features. 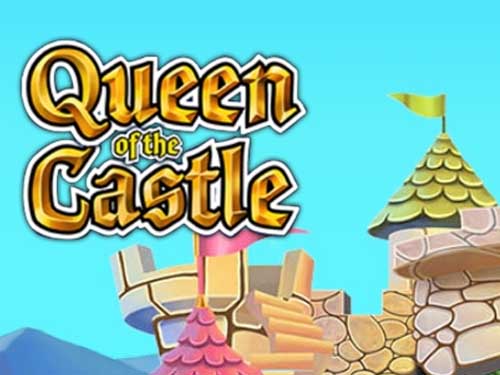 Play Queen of the Castle on any of these top casino sites;

Queen of the Castle is a 5-reel slot offering 576 ways to win and an RTP of 96.51%, for everyone who enters the castle gates. Overall the game has a light airy feel to it with well-drawn and colourful graphics, as well as an overbearingly noisy sound track that plays away as the reels spin. The reels themselves are set out inside the castle structure and begin in a 3, 4, 4, 4, 3 set up. Symbols include a standard flag, a corgi, a pouch of gold, a throne and four coloured gems making your higher values. With lower values being the A, K, Q, J and 10 symbols edged in gold to be given a royal twist.

Bet Amounts – Betting on Queen of the Castle begins at 40p per spin and can be increased to £100 per spin at its highest. To adjust the bet use the coin icons above and below the spin button, until you are happy with your bet amount.

Wild Symbol – Queenie herself is the wild symbol in Queen of the Castle. She will substitute for all other symbols except the combi scatter symbol.

Scatter Symbols – During the base game of Queen of the Castle the scatter symbol is the shield and landing three or more of these anywhere on the reels will trigger the bonus spins. But during the bonus spins the shield is transformed into a crown and helps build towards one of the aspects within the feature.

Locked Reels Feature – Triggering randomly you will notice vines begin to twist around reels 2, 3 and/or 4. Any symbols on these reels will now change to become a set of matching symbols and will lock together for a single respin.

Mystery Chest Feature – You will notice that on occasion red or purple chest symbols will appear on the reels in Queen of the Castle. If you manage to fill reels 1 with red chests or 5 with purple chests, then there are some special features triggered for doing so. 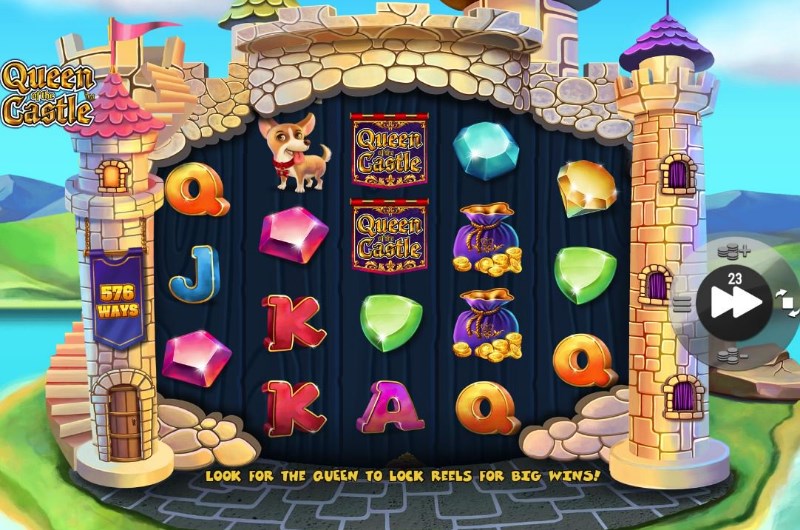 Mystery Chest Nudge Feature – If you should land a partial stack of red chests on reel 1 or purple chests on reel 5, you may trigger this feature. It doesn’t happen every time though so be aware of this going into the game. But should it trigger it will nudge the reels up or down until a full stack of chests is showing on the reel.  Once it has completed then the Mystery Chest Feature will activate, and you will play through that as shown above.

Bonus Spins Feature – Land three of the shield scatter symbol on the reels 2, 3 and 4 in Queen of the Castle to trigger the bonus spins round. you will be allocated 14 bonus spins and now the shield is transformed into a crown offering an extra in game feature. There is a meter at the side of the reels which will fill up every time you land a crown scatter symbol on reels 2, 3 and/or 4 and there are 4 levels to climb.

If you still have spins left after reaching level 4, then you can still fill the meter up when the crown scatter symbol lands. You will keep receiving 6 extra spins each time you fill the meter up, once you have reached level 4. Meaning you could extend your spins round for some time if you are lucky enough.

Well, Queen of the Castle certainly hits the spot for us. If you haven’t got your head round those features just yet don’t panic. Because once you begin to play they all become very clear and we hope we made them as easy as possible to understand. We loved the fact that the features almost integrate with each other and kind of feed off each other. Add to that the expanding rows during the bonus spins which increase your pay line structure and you are onto a winner. There isn’t much more you would need from Queen of the Castle, aside from a knighthood that is and we think NextGen Gaming are a way off from providing that just yet!