The 50’s was a great moment in time for the history of Rock N Roll and NetEnt has chosen this era as the theme for their next slot. Enter the Swipe and Roll diner and be delighted with a rocking soundtrack and lots of hip features.

Play Swipe and Roll on any of these top casino sites;

Swipe and Roll is a 5-reel, 20 fixed pay line slot offering a cool 96.35% RTP, for all you jive bunnies that want to kick back and have a swell time. Set out as if you are sat right inside an old-time diner, the reels are designed to look like a retro slot machine. There is an awesome rockabilly soundtrack playing along as the reels spin, which just gives the whole game a different feel. Even the spin button has been designed to look like a twist knob found on old fashioned slots, which is again another great aspect on the part of NetEnt. Higher value symbols include the watermelon, orange and plum, with lower values being the A, K and Q symbols.

Bet Amounts – Betting begins at 20p per spin and can be increased up to the maximum of £100 per spin. You will see that either side of the spin button there is the coin level and coin value sections, with lights on either side. Click on the lights to adjust each one up or down until you are satisfied with your bet amount.

Wild Symbol – There are two wild symbols in Swipe and Roll. The first is a blue diamond which will land on any reels. Your second wild is the same blue diamond with the X3 in front of it and this one will only appear on reels 2, 3 and 4. Both wilds will substitute for all other symbols except the scatter.

Scatter Symbol – A gold bell is your scatter symbol and it will only appear on reels 2, 3 and 4. Land three or more of the bell scatter symbol to trigger the bonus feature. 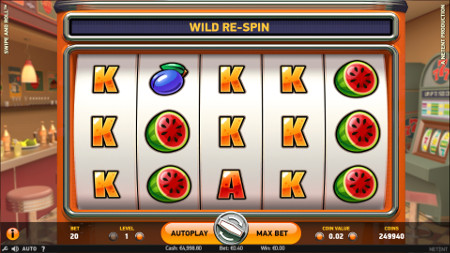 Wild Multiplier Feature – Remember that x3 wild symbol? It will give you a nice little treat if you land this as part of a winning combination. It will only appear on reels 2, 3 and 4, and when it lands it will award a x3 multiplier to any win that it helps to form.

Prize Reel Feature – Occurring at random during the main game, your reels will now change. The whole screen will condense from the normal reel layout to just one single reel. On the reel there is one single prize spot known as the ‘win zone’ and this is the centre position of the reel. This reel contains three potential win outcomes, an arrow, a coin or a scatter symbol. Once triggered the reel will spin and land on one of the symbols at random, which will award the prize as shown below:

Wild Respin Feature – Land a minimum of x3 of either the normal wild or the wild multiplier symbols, to trigger this feature. All of the wild symbols in view will be locked into position for a single respin of the reels.

Swipe and Roll Bonus Feature – Land three of the bell scatter symbols on reels 2, 3 and 4, or from the prize reel to trigger the swipe and roll game. You will now be taken to a 3-reel screen and you will get to swipe each reel in turn up or down. As the reels spin, they will land on either a coin wins or arrows, like you had in the prize reel. Each prize landed on the main position of the reel is your take home win. However here the arrows will expand to all three reels and also expand up to include the rows above giving you all the prizes in view as a win.

Swipe and Roll has jived its way into our hearts and souls, because it’s such a simple theme with an innately modern twist. Despite the small number of symbols involved there is a lot going on and it certainly keeps the players interest. Alongside the great features there is lots of wins happening in the base and bonus games, which is what brings players back to this slot time and again.