If you grew up in the 80’s then you are sure to recognise these next characters instantly. IGT have gone all retro on us and created a slot based around an iconic movie. It’s time to power up your plasma packs, because we ain’t afraid of no ghosts, are you? Join us as we become part of the team and fire up the Ghostbusters slot. 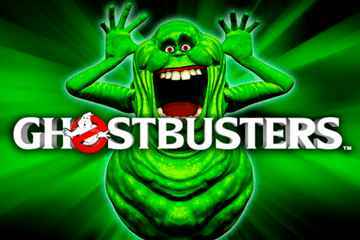 Play Ghostbusters on any of these top casino sites;

Ghostbusters is a 5-reel, 30 pay line slot that offers a variable RTP of 92.5% to 94.5% to players. Overall the game design looks like it’s been ripped straight from the 80’s timeline, with basic images drawn from the movie itself. Higher paying symbols are Ray, Egon, Peter, Winston and Louis. With lower paying symbols formed by the ghost trap, the ghostbusters car, a proton pack, a spectrometer and the famous ecto goggles. If the exciting imagery wasn’t enough to swing you into action, then you may change your mind when you hear about the music. Playing along as you spin the reels is the legendary soundtrack from the movie.

Bet Amounts – Betting begins at £50 per spin and can be increased up to a mammoth £1,000 per spin. Amend your bet by using the arrows on either side of the coin value, found to the left of the bet amount.

Wild Symbol – Our old pal Slimer is your wild symbol in Ghostbusters, but there is also a purple ghost symbol that is a wild as well. Both of these wilds will substitute for all other symbols in the game except the bonus symbols.

Mystery Feature – Nothing beats a randomly triggered mystery feature, but this one is slightly more interesting than others. With Ghostbusters mystery feature activated and able to trigger on any spin, (winning or not) you get the chance of bagging one of the four options below. Each one is designed to bring you bigger win potential than you would get in the base game. 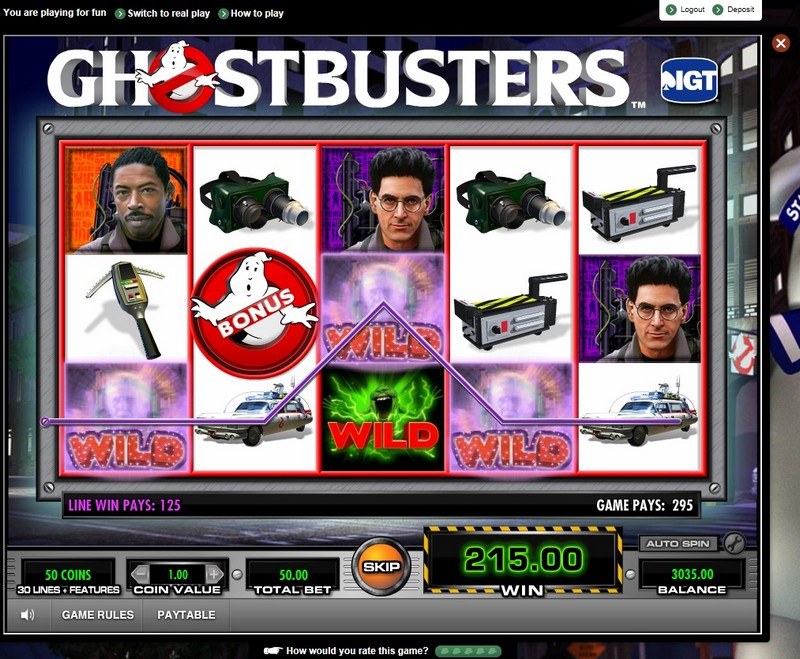 Ballroom Bonus Feature – To trigger this feature you will need to land x2 of the white ghost bonus symbol and one of the Slimer bonus symbols. You will be taken to the ballroom and given the chance of choosing x5 locations to fire your proton pack at. Each ghost that you shoot with the proton pack will reveal a cash sum beneath. Some ghosts will reveal a cash sum and a win multiplier too, these multipliers range from x2 to x5 the prize amount. The round ends once all 5 shots have been fired and any amounts won will be awarded as you are returned to the base game.

Stay Puft Bonus Spins Feature – Landing x2 of the stay puft monster bonus symbols and x1 Slimer bonus symbol will trigger this feature. You will get 8 bonus spins to play through, but this time you will have 40 pay lines instead of 30. All of the symbols change during the bonus spins as well, with the four main characters changing into blue suits and the remaining symbols becoming marshmallow related. The two wild symbols are now also transformed into marshmallow wilds that become sticky when they land, keeping them in place for the remaining spins. After each spin in the bonus round you may be awarded a flying marshmallow, which will turn any symbol it touches into a sticky wild symbol.

Whether you know of the Ghostbusters movie or not, you are going to love this slot. It is packed full of movie related icons as well as the infamous soundtrack, which makes it all the more enjoyable. Combine this with the plethora of extras and features that are available in the game and you have more than enough to keep you busy. Main game wins are slow in coming at first, but they soon start filtering through and become more frequent. The big money is made in the bonus games and these land a little easier compared to the mystery feature and the base game wins. However, this is not a game that offers quick wins so be prepared for that and ensure your balance can endure the wait, especially with a starting spin cost of £50!

May 31, 2019 Boku Slots Comments Off on Mega Jackpots Star Lanterns