When you think of Halloween it usually dredges up images of pumpkins, ghosts and witches. Halloween Jack encompasses all of that and so much more, to give you the Halloween spirit all year round. It has been freshly dug out of the NetEnt cemetery to bring you tricks and treats, whenever you want! 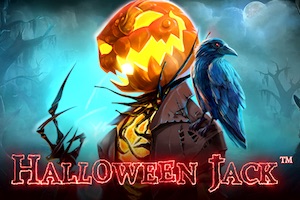 Play Halloween Jack on any of these top casino sites;

Halloween Jack is a 5-reel, 20 fixed pay line slot offering a ghoulish RTP of 96.28% for players to enjoy. Your game is set inside the crumbling courtyard of a gothic mansion, with its dark garden just beyond the view. The reels spin transparently between two pillars decorated with glowing pumpkins and a rather eerie looking spectre. As those reels spin away there are sounds playing along that are enough to send a chill down your spine!

Bet Amounts – Betting on Halloween Jack begins at 20p per spin and can be increased up to the maximum of £100 per spin. To change your bet you can adjust the bet level and coin value, which are found on either side of the spin button. Use the plus and minus symbols on each section to change the bet amount until you are happy with what is showing, then hit spin to resume play.

Wild Symbol – A rather scary looking glowing pumpkin head is your wild symbol in Halloween Jack. It will substitute for all other symbols in the game except the scatter. The wild symbol also has its own mini feature called the walking wild and we will go into more detail on that below.

Other Symbols – All of the symbols in Halloween Jack have been spooked up, including the usual card symbols. Higher paying symbols are the vampire girl, demon horse, vampire bat, black raven and the unlucky horseshoe. Lower paying symbols are the A, K, Q, J and 10 symbols that have been carved from stone, with arms crawling up and around them as if dragging them back in the earth.

Walking Wild Feature – This feature is active in both the main and bonus game of Halloween Jack and can help contribute to creating more wins when it triggers. Land yourself a pumpkin wild symbol anywhere on the reels to trigger the feature. Once it has landed and the current spin is completed, it will move one position to the left and a respin will be awarded. This will continue until the pumpkin has moved off the reels. Meaning you could be awarded anything from x1 to x4 respins depending where the pumpkin lands. 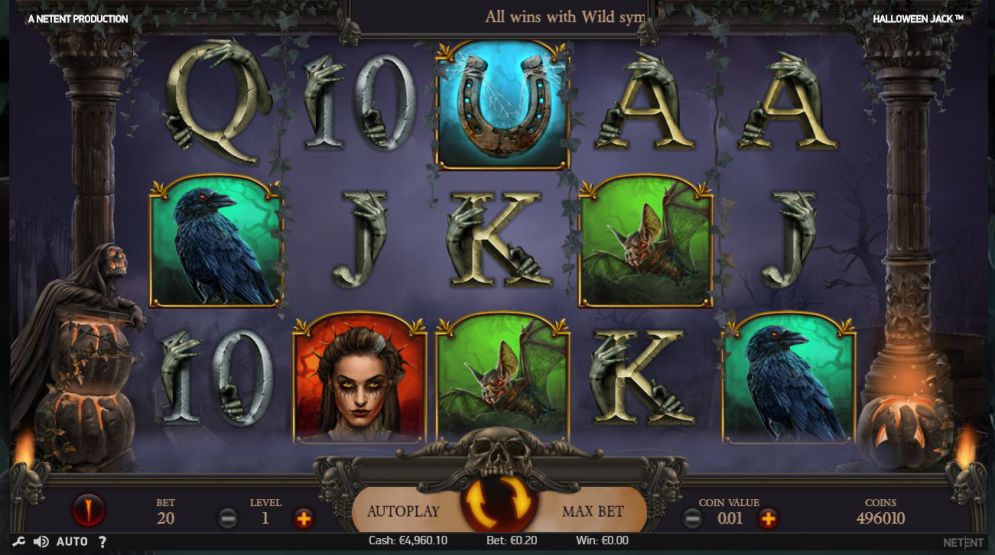 Bonus Spins Feature – Land three or more of the jewellery box scatter symbols anywhere in view and you will have triggered the feature. You will be awarded 10 bonus spins to play through during the feature game, with extra spins to be won as you play the round. Every time you land x3 jewellery box scatter symbols on the reels during the feature, you will be awarded x5 extra spins to your total. Walking wilds are also available in the bonus feature and there are some neat modifiers for you to collect as well, which are all explained below.

There is a special symbol in play during the bonus spins feature and this is the glowing lantern symbol. This symbol will only appear on reel 5 during the feature and every time you collect a lantern symbol it will light up a section to the right of the reels. There are 3 sections on view at the right of the reels and each one has three pumpkins that need to be lit up before the extra feature can be added to the reels.

It is more than possible to trigger all three of the above walking wild modifiers in the bonus spins round. The round itself cannot be retriggered but with the addition of the lantern modifiers and the walking wilds on top of the extra spins awarded by the scatters, the game can be extended quite a bit.

Halloween Jack is an exceptional game with lots to offer players, whether the Halloween genre is your thing or not. The walking wilds is a great addition to the game, even more so because it is present in the bonus spins game as well. Especially when you consider the stacked wilds that can be collected during the feature too. In the main game the wins come fairly often and are a good mix of low to high value on the pay scale. The walking wilds trigger often too which is a good way to while away your time whilst you wait for the bonus spins feature to drop. This can take some time but once it does trigger it is definitely worth the wait. Overall Halloween Jack from NetEnt delivers on all sides. Bringing the spooky atmosphere, brilliant graphics and of course win potential and tying it up in a spooky little Halloween bow for everyone to savour.