Flying right into our hearts and fresh out of the development studio of Microgaming, is this beautifully bright slot. Loosely based around the theme of lovebirds, we have the cute and quirky Tweethearts! There is lots to look at whilst the game is in play and two fabulous features to get your claws into as well. 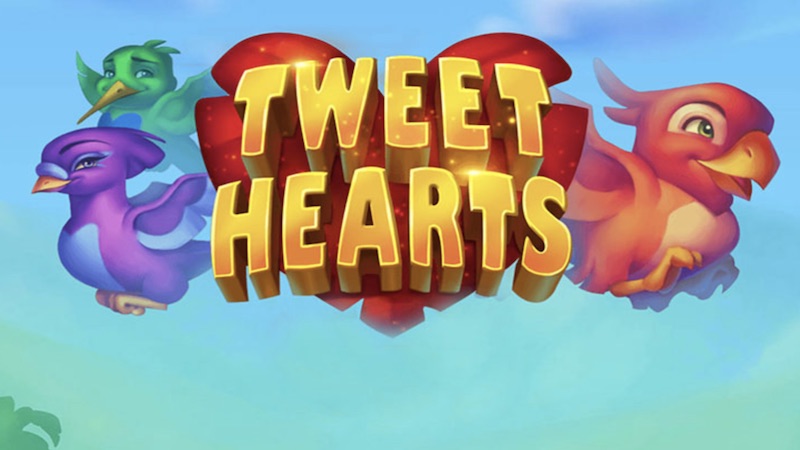 Play Tweethearts on any of these top casino sites;

Tweethearts is a 5-reel, 17 fixed pay line slot offering players an RTP of 96.02%. Looking almost as if floating in the sky, the reels are surrounded with flowers and vines, and spin above a misty forest scene. The reels are packed with stunning images of birds, and there is a cute twist to the usual card symbols too.

Higher value symbols are the Tweethearts game logo and birds in pink, green and purple. Lower value symbols are the A, K, Q and J, each one has a little tuft of feathers protruding from it. As the reels spin there is a beautiful soundtrack playing along. The music in itself is fabulous, but the addition of the birdsong mixed in just adds a little something extra to it.

Bet Amounts – Betting on Tweethearts begins at 10p per spin and can be adjusted up to £100 per spin. In order to amend your bet you need to click the casino chip symbol found just above the spin button. Once done a reel with all the available bet amounts will appear. Choose your selected bet amount and then hit the spin button to return to the game and resume play.

Wild Symbols – You have three wild symbols in Tweethearts, a normal wild, double wild and a lucky wild. Each one has a slight design difference to the other, the normal wild is just the word ‘wild’ in blue nestled in some purple flowers. It will land anywhere on the reels and will substitute for all other symbols except the other wilds and the scatter.

The double wild is the same design as the normal wild, except it has x2 ‘wilds’ written in blue against the purple flowers. It will substitute for any other doubled symbols, but you can read on below to find out more about the double symbols. It will not substitute for the scatter or the lucky wild as that is only available in the bonus game.

Lastly, we have the Lucky wild which is an egg in a nest with a pink ‘wild’ written across it and it only appears in the bonus game. There is a different set of rules for the lucky wild that you can read about in the bonus spins feature. 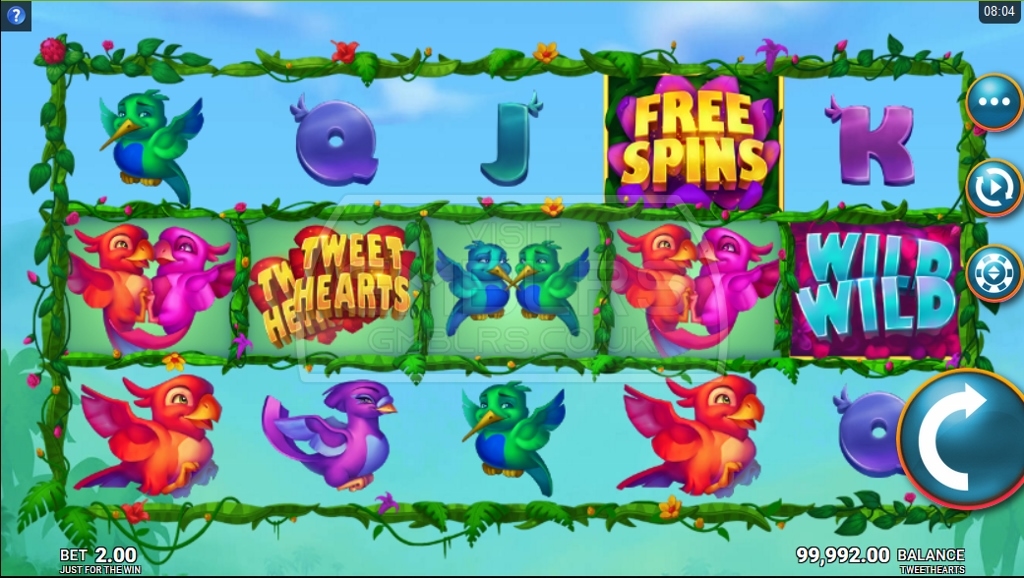 Scatter Symbol – Your scatter symbol in Tweethearts is depicted by the words ‘free spins,’ set against a backdrop of pink and purple flowers and green leaves. It can land as a single or double symbol anywhere on the reels. This means by landing a double symbol it counts as x2 single symbols. Which will go a long way in helping to trigger the feature as you need x5 or more of the scatter symbol to trigger the bonus spins feature.

Double Symbols – Tweethearts offers an interesting twist to the usual symbol placement, in that some of the symbols are doubled up. For instance, if you land a double pink bird there will be x2 pink birds occupying the same space, a double K will have x2 K symbols in the same symbol position, and so on. When you first enter the game be sure to check the pay table, as it shows each single and double symbol in play throughout the game. It also means you increase your win chances, because normally the maximum would be x5 of a kind on a pay line. But, thanks to the double symbols this increases to x10 of a kind, which when you check out the Tweethearts pay table brings a pretty hefty price point with it as a win!

Random Wild Feature – Triggering at any point during the main game only, you will see anything from x2 to x6 wilds being added to the reels. This will certainly boost those win chances for you as a player and will include either single or double wilds.

Bonus Spins Feature – Landing a mix of single or double scatter symbols of x5 or more, you will trigger the bonus spins feature. You will be awarded a set of x10 spins initially, with an extra spin awarded for each scatter symbol that was present above the x5 that are required. The lucky wild symbol is active during this round only and whenever it lands it will also award an extra spin to the total. Not only that, it will turn that reel position into a double symbol space for the remaining spins! The round can’t be retriggered from within which is a shame. However, thanks to the addition of extra spins from the lucky wilds, it can be extended somewhat which is always a bonus.

Tweethearts is a cute, fun game that combines great graphics and some interesting features. It may not seem like much on paper, but once the game is in play it actually works really well. Main game wins come fairly regular and that in part is down to the multitude of wild symbols that are present in the game. Once that bonus spins round hits then you will see where the money is to be made and that is thanks to the extra spin allocations that come from the triggering scatters and the lucky wild. Entering the round with a minimum of x10 spins is good enough for most people that’s for sure. But if you landed a few double scatter symbols when you triggered the feature and got over x5 scatters in view, you could be starting the round with even more spins. Add to that the extra spin awarded for each lucky wild that lands and you could be settling into this bonus spins feature for some time. Overall, Tweethearts is extremely playable, and we can see why it is proving popular amongst players of all experience levels.

April 26, 2019 Boku Slots Comments Off on Double up Ducks

September 14, 2018 Boku Slots Comments Off on Gladiator of Rome

May 30, 2018 Boku Slots Comments Off on Divine Fortune