With a title like Karate Pig, we at Boku Slots had to take a look at this popular Microgaming slot. It’s not normally a combination that you would expect, but we’re here to tell you why this is one to take a look at; especially with so many features on offer. 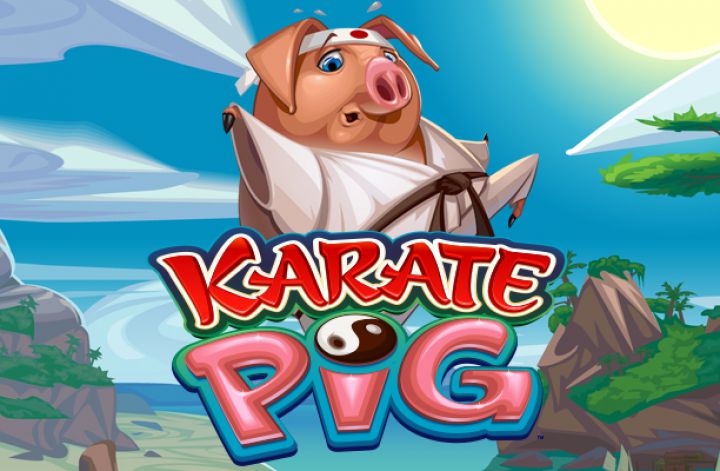 Play Karate Pig on any of these top casino sites;

Karate Pig is a 5-reel slot with 40 adjustable pay lines and a generous RTP of 96.5% for its players. The game includes stacked wilds, bonus spins and a special bonus game too. The soundtrack is oriental in nature and can get a bit much when the extra sound bites are activated, so we just switched it off during play.

Bet Amounts – Betting begins at just 1p if you only want to play with one active pay line. However with all 40 lines in play it is just 40p at the lowest coin cost and level. Your maximum bet amount is £200. You can adjust your coin value from 1p to 10p and the coin level from 1 to 5, as well as adjusting the amount of lines in play. This means there is a lot of scope to make the game as affordable as possible for every player.

Wild Symbol – The Karate Pig logo is your wild symbol and will substitute for all other symbols, except the bonus and the scatter. It will also pay out a jackpot of 10,000 coins if you land 5 of the wild symbol across an active pay line. There is also the added bonus of stacked wilds in the base game, meaning better chances of winning combinations for players.

Scatter Symbol – A golden coin with a stork embellished on the front is your scatter symbol. Land 2 of these on reels 1 and 5 to trigger the bonus spins feature.

Bonus Symbol – Your bonus symbol is the karate pig character and by landing three or more of these anywhere on the reels, you will trigger the karate pig bonus games. 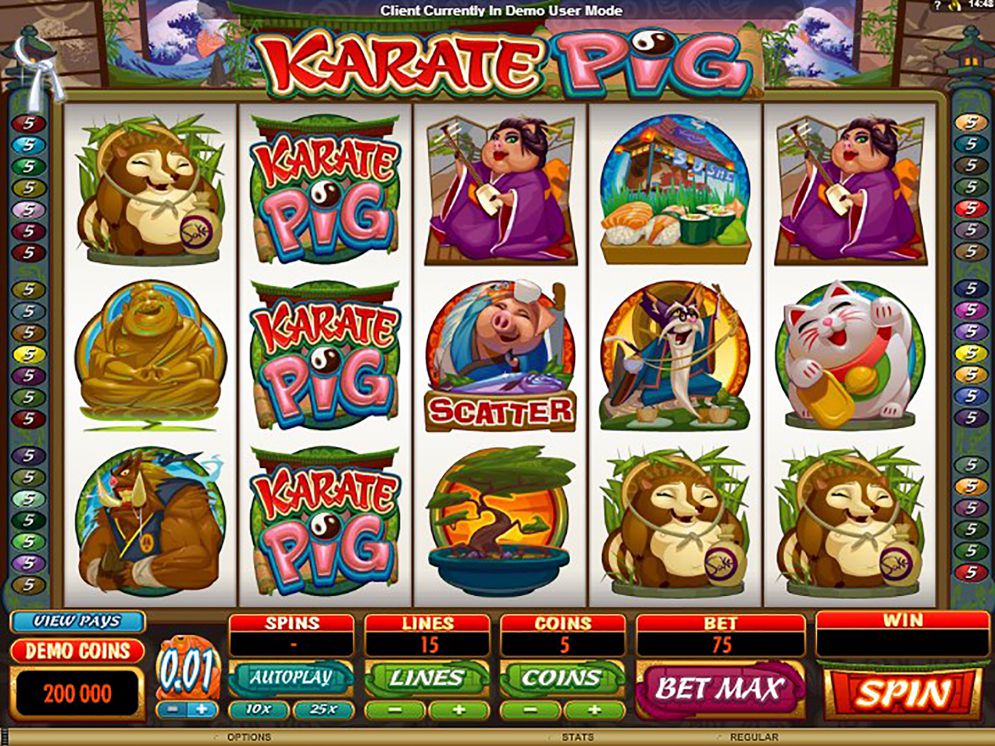 Bonus Spins Feature – Land 2 of the scatters on reels 1 and 5 to trigger this feature. You will be awarded 15 spins and these can be retriggered whilst the bonus spins are in play, making the potential win chances much higher. During the feature all wins are doubled.

Karate Pig Feature – Once you have triggered this feature, you will be given the task of working your way up through karate belt rankings. There are 7 different coloured karate belts that you have to earn to enter the final game and your current belt level is constantly displayed at the top of the screen. To earn your way through the belt levels you will need to play the Pork Chop or the Hammer bonus games several times, which in turn will end with you playing the Final Showdown part of the game. Once you reach the final showdown and complete it your belt will reset to white and you will start the task of climbing the belts all over again.

At first glance Karate Pig didn’t hold much interest and the RTP didn’t give out much hope either. However, upon playing we were won over literally. The karate pig bonus games give an interesting twist and allow you to really get engrossed in your game, when climbing the belt levels. Add to that the stacked wilds and the bonus spins, and the game has the makings of achieving greatness in the slot world. The soundtrack was a little too much for us, but other than that we had no major issues and found it to be an overall pleasing game to play.