Back we go to a time of dragon slayers, kings and princesses with our next slot. Developers Eyecon have once again created a game of such high standards it’s hard to know where to start. Kingdoms of Cash is a medieval theme game that is going to appeal to all experience levels. It is packed full of some pretty neat features too, read on below to find out more. 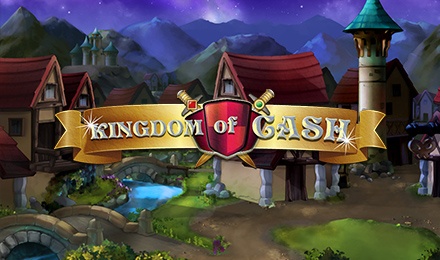 Play Kingdom of Cash on any of these top casino sites;

Kingdom of Cash is a 5-reel, 25 pay line slot offering an RTP that seems a bit low of 95.3% for players. But, tie this in with the extra features and the extreme playability this game brings, and we still think you are on to a winner. Your reels are floating in what appears to be a village square of some sorts, with the king’s castle just off to the left.

Symbols include the knight, magician, troll, pink gem and blue gem as your higher values. Meaning lower values are depicted with the A, K, Q, J and 10 in ornate script work and looking very regal too might we add! There isn’t much by way of backing music when you spin these reels. Instead you get some kind of trumpeting sounds as certain symbols land. Win combinations garner a sound bite, but in all it’s not much to write home about. We ended up turning the sound off because the trumpet began to drive us batty after a while.

Bet Amounts – Betting begins at 1p per line in play and can be adjusted up to the maximum of 50p per line in play. For players this means spins can vary from 1p per spin up to the limit of £12.50 per spin. Making Kingdom of Cash one of the slightly more affordable games for all pockets. Adjust the bet by first picking how many lines you want active, then choosing what you want to bet per line. Once you have decided this, your total bet will show in the top right hand of the reels.

Wild Symbol – Kingdom of Cash has the royal princess as their wild symbol, and she doubles up as a scatter symbol too. She will substitute for all other symbols except her own scatter and the king scatter symbols.

Scatter Symbols – There are two scatter symbols in Kingdom of Cash, the king and the princess. Each one has their own individual feature to trigger. 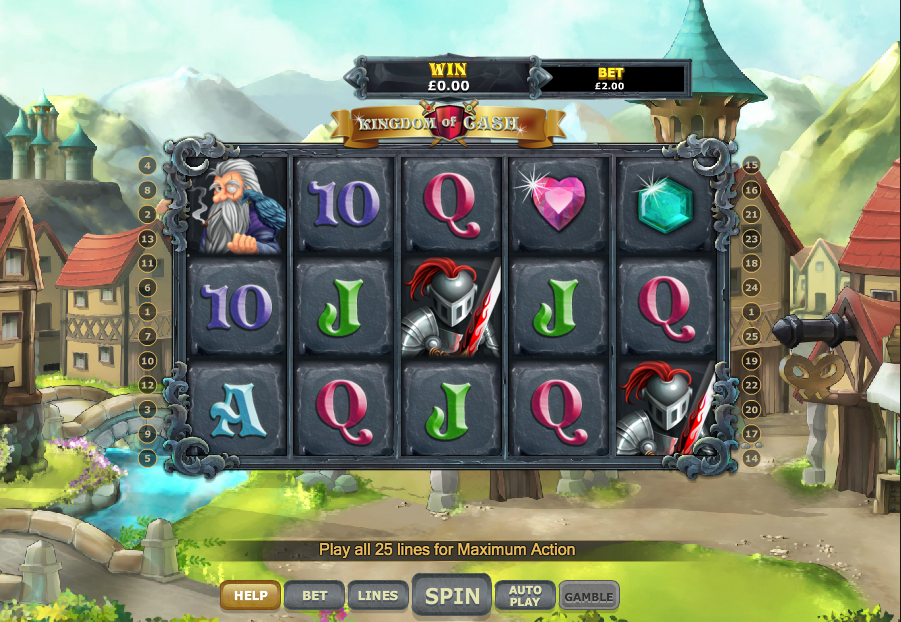 Gamble Feature – If you wish to, there is the option after every winning spin to gamble that win, in an attempt to double or quadruple it. Hit the gamble button to be taken to a fresh screen showing an overturned card. In order to double your win, you need to correctly guess the colour and to quadruple your win you need to correctly guess the suit. If you guess correctly you can guess again on a fresh card up to a maximum of 5 times. But guess incorrectly and you will be returned to the base game with nothing!

Combat Feature – Landing three or more of the king scatter symbols anywhere on the reels will trigger the combat feature. You will now be given the choice of picking a character to fight for you from the magician, knight or troll. Once you have chosen your warrior, the game will pick its chosen warrior and you will watch them fight. If you win the fight you will progress to the next round and there are four possible rounds for you to play. Each round will award a win multiplier with a maximum win of x100 your bet amount. Lose the fight and you return to the main game with whatever winnings you have accrued throughout the combat round.

Bonus Spins Feature – To trigger the bonus spins round on Kingdom of Cash, you need to have landed three or more of the princess scatter symbol anywhere in view. The number of spins you are awarded are dependant on how many scatter symbols you landed when the feature triggered.

During this round every win will have a x3 multiplier awarded to it, giving great win potential for players that trigger the feature. Spins can be retriggered up to a maximum of x15 from within the round as well. Not only that but the combat feature is also active here too, so if you land three king scatters you will be taken to the combat feature to play through. Once the combat feature ends you will return to your bonus spins to continue on with the round.

Kingdom of Cash has a lot going on, but once you understand how each of the features work you will soon be clicking away. The characters are animated, so when they form part of a win they come to life on the reels which is fun to watch. The fact that the combat feature can be triggered from within the bonus spins is an added extra that shouldn’t be overlooked. Overall the game runs smoothly and offers fast wins in both the base and bonus games. Kingdom of Cash is certainly a game you will find easy to play and want to come back to time and again.