When the world is in peril and there are riches to be found who do you turn too? NetEnt of course and their merry band of superheroes. In this sci fi themed slot the defenders of the universe set out to protect the Wild Worlds they live in. It’s your duty to join them and battle the invaders, winning prizes along the way.

Play Wild Worlds on any of these top casino sites;

Wild Worlds is a 5-reel slot with cluster style pays instead of the usual pay line structure. It has an RTP of 96.74% and also includes an avalanche drop to the symbols too. This option means in order to land a win you need to match 3 or more symbols. At least three of those symbols need to be matched in a horizontal or vertical line.

Your reels are set inside the superhero command centre which overlooks the Wild Worlds skyline. All the symbols are different coloured stones, and some have faces of the heroes carved into them. There is an epic soundtrack pumping along, which certainly adds to the overall feel of the slot.

Bet Amounts – Betting on Wild Worlds begins at 20p per spin and can be increased up to a whopping £400 per spin. There are no standard pay lines to amend, instead you can change the bet amount and the bet level. These are found on either side of the spin button, you simply click the plus and minus until you reach your chosen bet amount.

Avalanche Slot Feature – Avalanche style slots mean that players get the chance to gain more than one win per paying spin made. Every win you land on Wild Worlds will be removed from the reels and new symbols will drop into the space they leave behind. This means you stand a chance of landing a second win from the new symbols dropped into place, giving multiple win chances from one spin!

Wild Symbol – Your wild symbol on Wild Worlds is the letter W in the form of a gold and red gemstone. It will substitute for all other symbols except the scatter.

Scatter Symbol – A multi coloured wheel with different sections matching the three different worlds is your scatter symbol. Land three or more of these anywhere in view to trigger the bonus feature.

Other Symbols – Higher paying symbols include a dark gem with a gold crown on it and the three gems with the heroes faces on them in blue, pink and green. Lower paying symbols are the standard gems, the blue one with a wave on it, pink has a lightning bolt and green has a leaf on it.

Hero Wild Feature – Giving players an extra boost to the game, this feature triggers when you land x3 or more matching hero gem symbols. Once you do, all other matching symbols to the winning combination will now be turned wild. Once they all turn wild they will complete any potential wins, then the winning combinations plus the remaining hero wilds will all be removed from the reels.  Thus, making room for new wins to be created by the symbols that fall into the empty spaces! 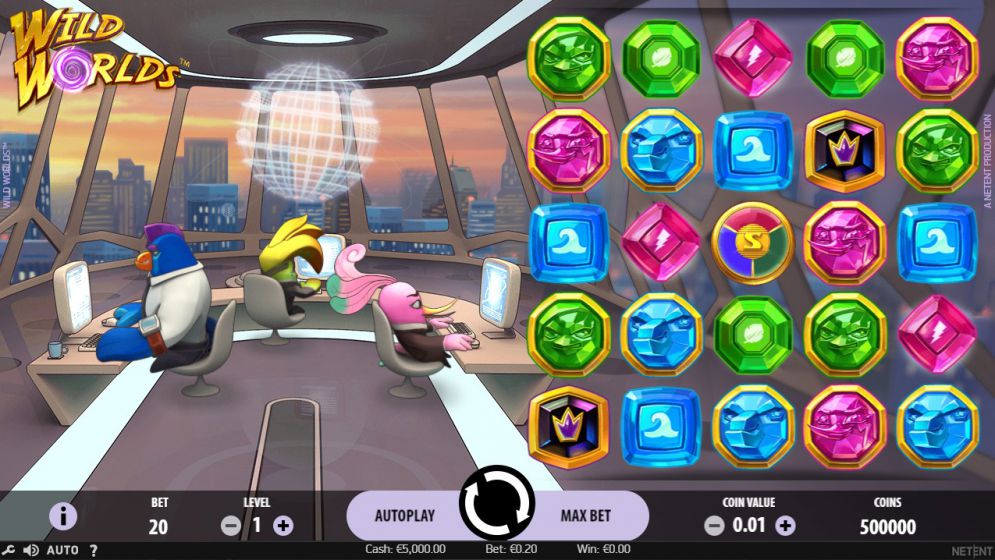 Destroy Feature – Triggering at random after any non-winning spin, the destroy feature in Wild Worlds is a huge help to you on the reels. This will remove multiple symbols from the reels leaving behind only the scatter and one of the gemstone symbols. It means that you have a chance of creating a massive win and of course once they are removed from the reels, a second chance follows too.

Bonus Spins Feature – Landing three or more of the scatter symbol anywhere on the reels will trigger the bonus spins feature. You will be awarded with 8 bonus spins to play through, and they will be played in one of three different settings. In each world you will see that the heroes have to battle a monster relating to the theme of the world you are in. You will see a meter at the side of the reels and every time you land a winning combination that meter will fill up. When it fills up the heroes will attack the monster that is on the screen and once you destroy the monster, the feature for that world will be triggered!

Wild Worlds is an epic game of many levels and NetEnt have really outdone themselves this time. With the addition of the destroy feature to the game, it means that even non-winning spins can end up being lucky. Wins are a bit slow in the main game at first, but after a few spins they began to pick up a little. Once the features kick in though this is where the bigger wins are to be found. The main bonus spins feature is so much fun and gives another level to the usual bonus spins rounds, with boss attacks and extras for defeating the monsters. There is so much going on in Wild Worlds we can see it can be a little over whelming. But once you get your head around the features it’s a pretty amazing game to play.

January 14, 2020 Boku Slots Comments Off on Hearts of Venice