Playtech have developed an epic homage to Batman and The Dark Knight Rises movie. With a dark theme and some interesting features including a jackpot game, there is a lot to see when you visit this side of Gotham! 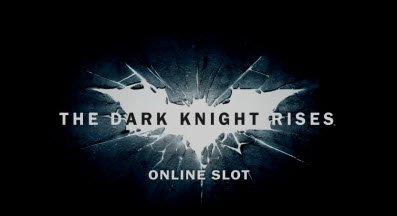 Play The Dark Knight Rises on any of these top casino sites;

The Dark Knight Rises is a 5-reel, 576 all ways win slot, offering players a lower than usual RTP of 94.75%. But, don’t be too disheartened, the game itself has a lot to offer you whether you are a fan of the movie franchise or not. Set inside a rather technical looking setup, the reels spin against the backdrop of Gotham City at night. Symbols include Batman, Bane, Commissioner Gordon, the Bat tank and the Bat bike as your higher values. With lower value symbols being metallic looking A, K, Q, J, 10 and 9. There is a nifty progressive jackpot game on offer here too, giving players the chance of bagging one of four available jackpots as a prize on top of any base game winnings.

Bet Amounts – Betting on The Dark Knight Rises begins at 40p per spin in this game and can be increased up to £20 per spin. In order to adjust your bet, you amend the coin value to the left hand side of the screen until you are happy with your stake.

Wild Symbol – Your wild symbol is the batman symbol used to light up the streets of Gotham in times of need. It will only land on reels 2, 3 and 4, but will substitute for all other symbols except the scatter.

Scatter Symbol – A fusion reaction bomb of some kind is your scatter symbol. It will land on reels 2, 3 and 4 only and landing three or more of these will trigger the bonus games for you.

All Ways Win Feature – This is an interesting addition to any slot game and certainly gives an extra twist to the game too. To land a win in The Dark Knight Rises you need to have 2 or more matching symbols that land consecutively from left to right on adjacent reels. This is on set symbols only, so Batman, Bane and Commissioner Gordon can award wins with x2 or more symbols. Batman’s car, bike and the A, K, Q, J, 10 and 9 all need to have a minimum of x3 symbols to land a win.

Fire Rises Feature – To trigger this feature you need to land three stacked reels of matching symbols on reels 2, 3 and 4. Once you have achieved this, reels 1 and 3 will award random multipliers between x1 and x25 your win. 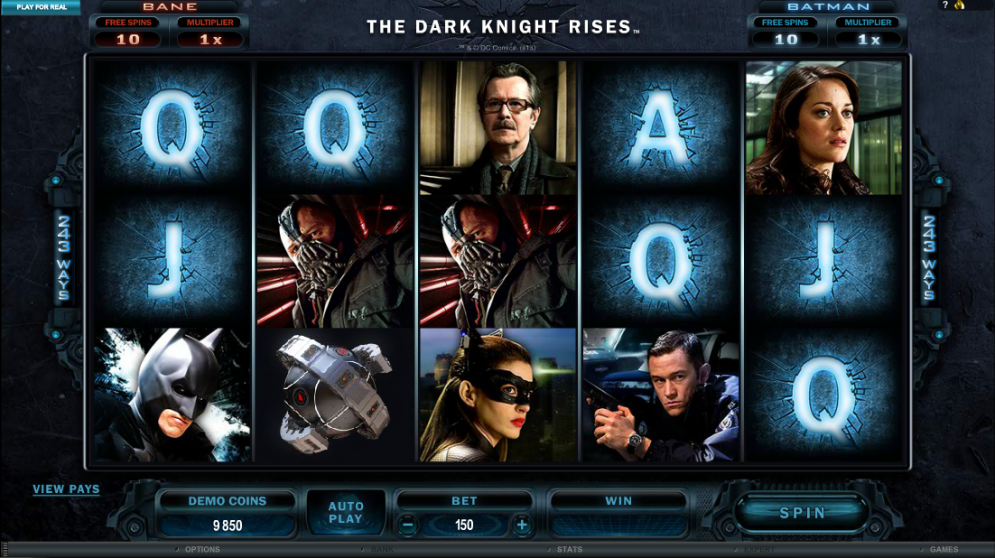 Fusion Reactor Feature – We do love a wheel of fortune in any game, but here in The Dark Knight Rises it has been stepped up a little. Land x3 fusion reactor bombs on reels 2, 3 and 4 to trigger this feature. You will now be taken to a new screen where you will see Batman and Bane ready to duke it out on either side of the wheel. There are three mini games up for grabs which all depend on the outcome of the wheel spins.

On the wheel you will see it has been split into red and blue sections with bonus spins, multipliers and the word start spread out across the wheel. If you land on a + section, you win the appropriate spins and the x gives you multipliers. These will be clocked up underneath either Bane or Batman. Once the ‘start’ section lands at the award point, you will activate either the Batman or Bane games. But if the start sections land for both Batman and Bane, you play the combined game giving you all the accumulated spins and multipliers!

Heroes Jackpot Feature – What we love most about this progressive jackpot feature on The Dark Knight Rises, is that it is triggered at random from any spin of any bet amount. This means people who stake lower are in with a chance of triggering it, as much as those who stake higher. There are four jackpots on offer the Mini, Minor, Major and Grand, and by triggering the game you are guaranteed to take one of these prize pots. You will be taken to a new screen with the jackpots listed at the right and a honeycomb structure to the left. Your jackpot win is now in your hands as you will need to choose from the sections on the honeycomb structure to reveal a colour beneath. Underneath each jackpot is a set number of circles that need to be filled to win the amount held in the jackpot screen.

This game is timed, in as much as you have a set amount of time to choose a symbol. Once a symbol is chosen the timer resets and if you don’t select one in that time the game will choose for you. You will not leave this feature without one of the jackpots, but choose wisely and as quickly as you can to ensure you have picked the sections you want.

The Dark Knight Rises is an exceptional game from the Playtech catalogues and a great way to enjoy the trials of Batman long after the credits have rolled. With interesting features and a progressive jackpot that is guaranteed once you trigger it, you really couldn’t ask for more? Or could you, because we found that the Fusion Reactor feature was super hard to trigger, whereas the Fire Rises was a bit easier. Not just that, the base game wins tend to lean more towards the lower end of the pay scale, meaning you need the Fusion Reactor feature to land those bigger wins. But if you have the balance to sustain the wait and cost in triggering it, you will be well rewarded once it activates.