Playtech have taken a cult classic and adapted it, so that once the movie ends the fun doesn’t have to. Top Gun slots combines the best parts of the movie and adds in bonus features, so that the thrills never stop. So, lets speed on through with this review, so you can choose one of our top casinos and try it out for yourself. 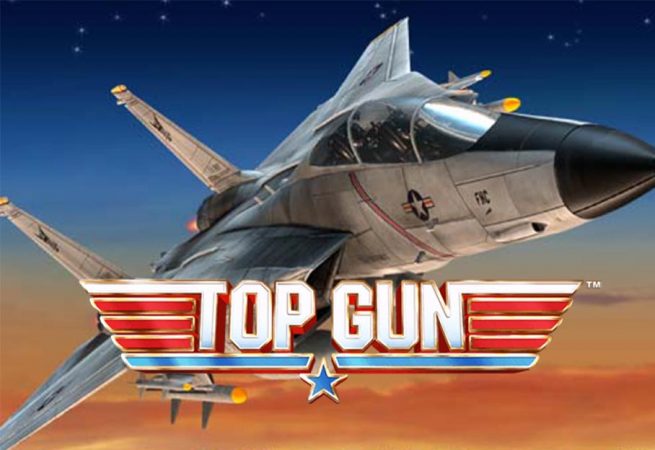 Play Top Gun on any of these top casino sites;

Top Gun is a 5-reel, 243 ways to win slot offering a lower than expected RTP of 94.93% for players. Now we don’t expect this should have too much of a negative impact on the game itself, but only time will tell. The reels spin along to Berlins, Take My Breath Away which is a song synonymous with the movie. All the symbols are Top Gun themed with characters such as Goose, Kelly and Iceman, along with other air force symbols as well.

Bet Amounts – Betting begins at 25p per spin and can be increased to £250 per spin, making it somewhat steep at the higher end! Be sure to amend your bet amount using the plus or minus buttons to the left of the screen before you hit spin. Remember that once you hit spin you cannot amend your bet, so it’s always worth checking twice.

Wild Symbol – The Top Gun Logo is your wild symbol and it substitutes for all other symbols except the scatter. Landing 5 of these on a winning line will award the highest coin win of 1,500, so watch out for those.

Scatter Symbol – Your scatter symbol is a fighter plane which will land on reels 1, 3 or 5 only. Get yourself three fighter plane scatters and you will trigger the Danger Zone Bonus Spins feature.

Dog Fight Wilds Feature – At any given time the fighter plane will fly to the front of the reels and fire wilds onto the reels for you. This can be any amount from 1 to 15 wilds, which will clearly improve your chances of winning. Dog Fight Wilds can occur during the base game or the bonus spins, just another way for your wing man Playtech to show they have your back!

Danger Zone Bonus Spins Feature – Having landed three scatters on reels 1, 3 and 5 you will be taken into the bonus spins feature. Here you will be allocated 8 bonus spins to play through and you will have the chance of retriggering these spins again.

Did Top Gun ‘take your breath away’ like it did with ours? We literally could not put this game down, the added extra of the fighter plane rushing forward and firing at the reels, gave it such a different feel than we could have imagined. Playtech have done great things before, but they have outdone themselves here. The winnings could have been higher due to the obvious popularity of the game, but that being said they come often enough for it to not be too noticeable.