Now everyone loves Donuts and in this American diner inspired slot from Big Time Gaming, that’s exactly what you are about to get; lots and lots of delicious donuts! This exciting game offers a ways to win set up, instead of standard pay lines. Add in the two action packed features hidden away in these reels and we’re sure you’re as eager to take a look as we are. 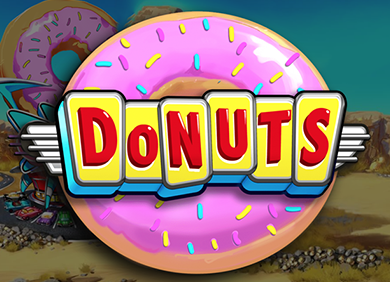 Play Donuts on any of these top casino sites;

Donuts is a slightly different set up to your standard games, offering a 4-reel slot with 2041 ways to win and an RTP of 96.54% for players. Your reels are set out to spin above what appears to be an American desert scene, complete with a Donuts diner and clouds floating through the sky.

There are plenty of sounds whilst you play too, including a soft backing track complete with birdsong. This is overlapped with the normal bells and whistle sounds you associate with a standard slot machine. It made for an odd coupling, but we felt it wasn’t too off putting overall, so we left the sound on. But remember you do have the option to mute if you need too.

Bet Amounts – Betting begins at just 5p per spin and can be increased up to £10 per spin, making Donuts one of the more affordable slots around. Change your bet using the left and right arrow symbols on either side of the bet amount held above the spin button. Once your chosen bet is showing simply hit spin to resume your game.

Wild Symbol – Your wild symbol looks to be a stacked multi coloured cake cut in half, with the word wild underneath. The cake wild symbol will only land on reels 2, 3 and 4, but it will substitute for all other symbols except for the scatter.

Scatter Symbol – A gold donut with the word bonus underneath it is your scatter symbol. Landing three or more of the gold donut scatter symbol anywhere on the reels, will trigger the bonus spins feature for you.

Ways to win Feature – Most slots have standard pay lines in place as your way of winning. Donuts offers 2041 ways to win instead of this. The way it works is that wins can be formed from left to right as long as there are three or more matching symbols anywhere on the adjacent reels. This means that wins don’t have to necessarily be in a straight or diagonal line, they just have to be on the next reel to its matching counterpart. 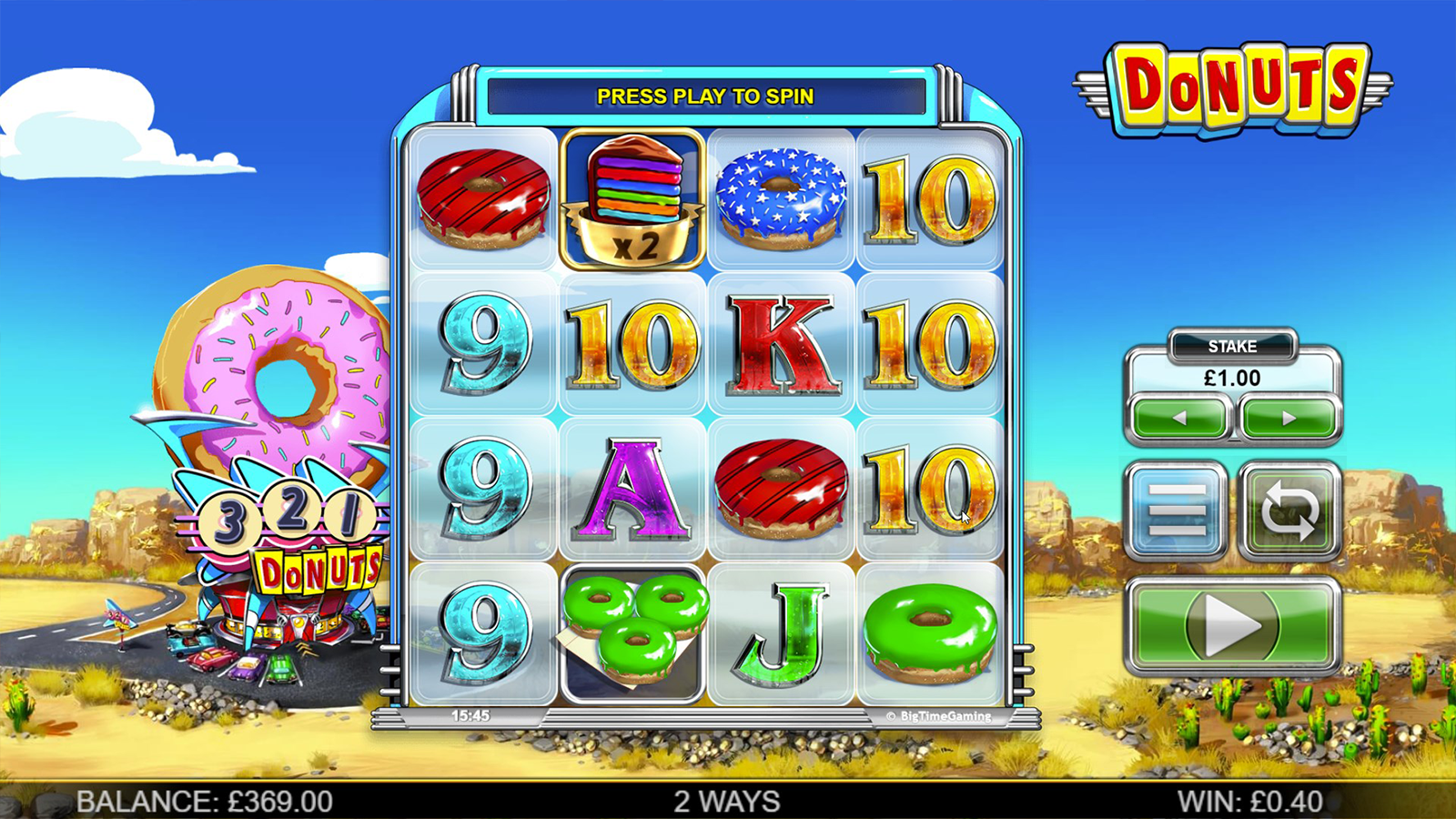 Box Multiplier Feature – When you begin to play you may notice that occasionally there is a box of donuts landing on the reels. These boxes will have either extra wild symbols, or 1 to 4 donuts inside them when they land in matching colours to your standard donuts (purple, red, blue and green). These symbols work as multipliers and will multiply your win by either the number showing beneath the wild symbol, or by the number of donuts inside the box. The wild symbols work as multipliers and wild symbols too so it’s a double whammy for you.

Bonus Spins Feature – Land either three or four of the golden donut scatter symbol to trigger the bonus spins feature. You will be allocated with either x12 or x20 spins respectively, but before you play through your spins you will be taken to a new screen to decide your win multiplier.

The new screen will only have blank spaces and gold donuts in view. To the left you will see the diners sign saying 3, 2, 1 and it will be lit up. You get three spins on these reels, with each spin adding gold donuts to the screen. Each gold donut has a random multiplier allocated to it and the more donuts you have showing on the screen, the bigger the multiplier you will have for the main spins round. Once the three spins have been played, you will see the total multiplier that you are taking with you into the bonus spins round.

You will then revert back to the main screen, with the symbols used in the base game and will play through your spins with the added chance of winning extra spins too. If you land 2, 3 or 4 golden donuts during the bonus spins round, you will be awarded 10, 20 or 30 extra spins to your total. All spins will be played at the total multiplier you accrued during the 3, 2, 1 round at the beginning of the feature. The round ends once all allocated spins have been played through.

It can take some time to get your head around the bonus feature at first, but once you are playing the game becomes much clearer. Main game wins come fairly often and are a nice mix of low and higher paying wins, which is a good way to help pass the time as the bonus feature takes much longer to trigger. Though we understand why after playing through it, as there is the chance of landing a rather large win multiplier and that’s before you add up the extra spins that can be accrued during the round itself! Overall the game is fun and fast paced with lots of bright and cheerful graphics that is bound to be enjoyed by all.