Snow White is well known and loved by all, but she has a wild side you know and sometimes she likes to cut loose with the dwarves and play some online slots. Her go to gaming centre of choice is of course Red Tiger Gaming and they decided to honour Snow, by giving her a slot of her own. Get ready to wander in the woods with Snow Wild and the 7 Features. 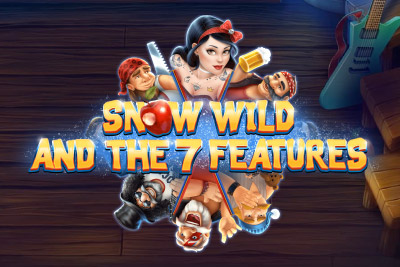 Play Snow Wild and the 7 Features on any of these top casino sites;

Snow Wild and the 7 Features is a 5-reel, 20 fixed pay line slot offering a poisoned apple for an RTP of 95.21%. Don’t be worried though despite the low RTP there are lots of extras to get your teeth into, all triggered by the lucky wheel. As for the game itself, it’s been given a modern twist with the dwarves being band members and Snow the lead singer. Surrounding the reels are guitars, tables and of course apples! Symbols are all designed with the world of Snow Wild in mind and include a bag of diamonds, a mug of beer and an apple with a bite from it, which are your higher value symbols. Lower values are of course the A, K, Q, J and 10 all given a cartoon feel to them as well, the only thing that doesn’t seem to fit is the odd backing music. We are aware that the game designers have updated Snow and the dwarves, but the strange electronica guitar sounds don’t match well enough for us. Luckily you can do what we did and switch it off if you wish too.

Bet Amounts – Betting on Snow Wild and the 7 Features begins at 10p per spin and can be increased up to a whopping £250 per spin, if you want to go that high. All you need to do to amend your bet is to click on the stake amount and select your new stake from the list above.

Wild Symbol – Snow Wilds reflection in the magic mirror is your wild symbol and it will substitute for all other symbols except the lucky wheel. It’s also your highest paying symbol in the game too and offers a x600 coin win for landing 5 wilds on a winning line. 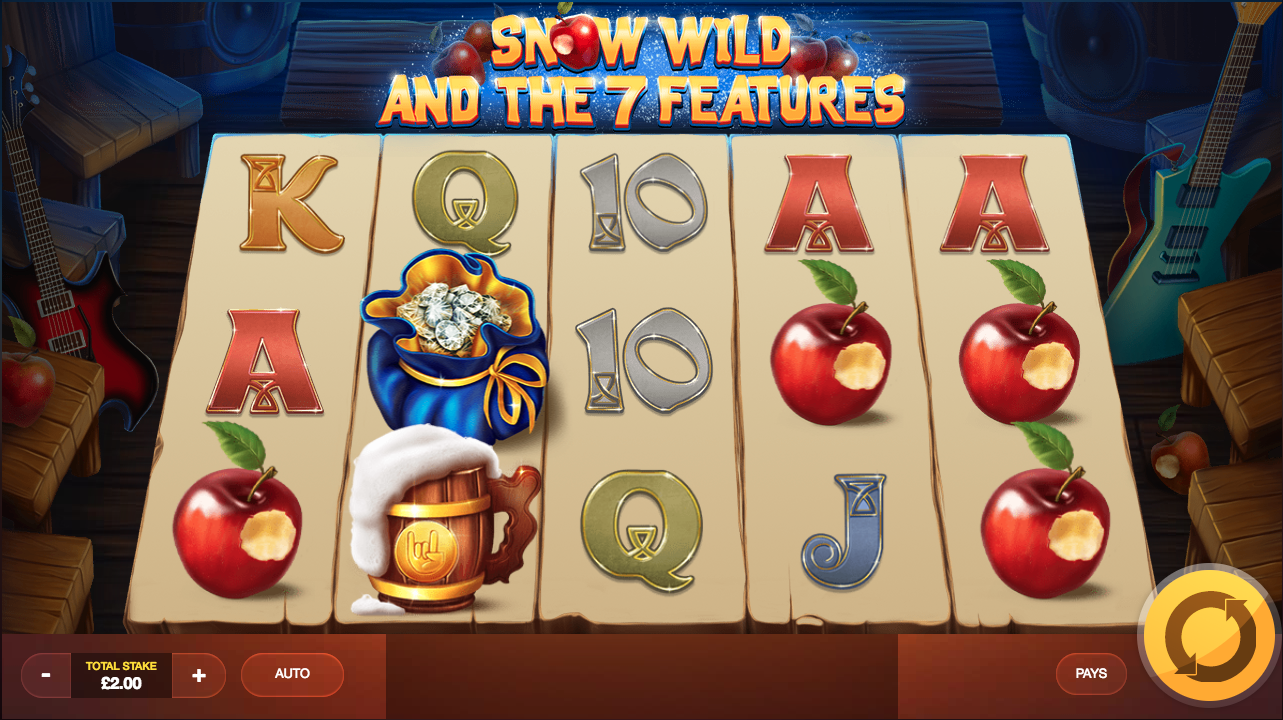 Bonus Symbol – In Snow Wild and the 7 Features your bonus symbol is a lucky wheel! This wheel has 7 sections to it and landing three or more on the reels will trigger the bonus and allow you to spin the wheel. Whatever section the wheel lands on is the feature you will play in the next part.

Lucky Wheel Bonus Feature – It isn’t called Snow Wild and the 7 Features for no reason. Once you have triggered the bonus by landing three or more lucky wheel symbols, you are in with the chance of playing one or more of the different features shown below. Let’s not forget that Snow herself is also on the reel and she plays a very special part in the feature too:

It is possible to land multiple feature triggers by landing the wheel on Snow Wild first. Your reels will spin until each of the features have played themselves out. Some like the goldy feature will only offer one respin of the reels, whereas others like sneezy could offer more than one.

Snow Wild and the 7 Features is certainly a new take on an old classic and we for one loved it. The main feature was a bit overwhelming getting used to all the different facets at first. But once they started paying out, we got the hang pretty quick. Wins come fast and often in the main game and once the bonus hits, it gets even better. However, you may have a little wait for that bonus to hit, but it is worth the wait we can tell you that. Well designed, well put together and lots of fun. We can see this twist on an old tale taking off and can’t wait to see what may come next from Red Tiger Gaming and this genre.