The dreaded word ‘tax’ isn’t something we like to think about when we’re spinning the reels on our favourite slot game. We bet online because we want to have fun and hopefully win some money. But have you considered if the money you win is taxable? Especially if it’s a life changing amount and you’re already planning on moving to a private island and sipping cocktails all day. Don’t worry, we have the information you need throughout this guide, so here are gambling winnings tax in the UK explained.

The History of UK Gambling Tax

Gambling isn’t a new thing for us humans, in fact it has been around for centuries in various formats. Betting taxes weren’t introduced until 1961, when a duty of 6.75% was put onto the bookies and 9% tax was placed on the punter. At that time if you placed a bet, you were given the choice if you wanted to pay tax on the stake or the winnings. The obvious choice is to pay on the stake, which is what most bettors opted for, because you didn’t want to pay a lot more tax if you won.

In 2001 the rules changed and Gordon Brown who was the Chancellor of the Exchequer, ended the bettor taxation. This meant that the player no longer had to pay any tax on their bets, but instead the bookmakers were now responsible for a 15% supply tax. This change was introduced as a way to prevent UK players from choosing offshore companies, which was an issue due to the surge in the popularity of online gambling worldwide.

Sadly, this response by the government didn’t resolve the issues of tax avoidance, even though it was a happy change for the gamblers. Because the betting companies were taxed at the point of supply, many of them moved out of the UK meaning they didn’t have to pay tax to the UK government. You will still find a lot of the larger popular brands are based offshore in places like Gibraltar or the Isle of Man.

The UK government resolved the issue in 2014 when they amended the Gambling Act 2005. Instead of the taxation being on the point of supply, it was now at the point of consumption (also known as remote gaming tax). So, if the betting company had any UK players, then they would have to pay 21% tax. Following the introduction of this legislation, many foreign gambling sites decided to close their doors on UK players.

Do Casual UK Gamblers Pay Tax on Their Winnings? 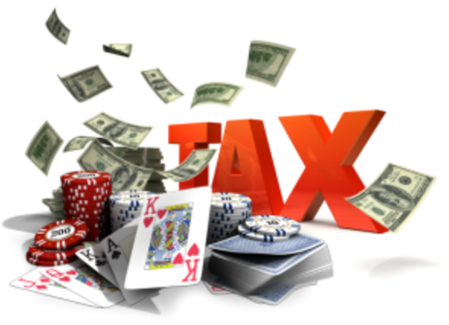 Now you’ve had a little history lesson, it’s time to explore whether UK players have to pay tax, which you may already have surmised from the information above.

The thought of winning that jackpot and then having to workout what you owe HMRC is an awful image. When you gamble there’s always a chance you will lose money, it’s part of the risk, but then having to give away a percentage when you do win, doesn’t exactly feel great.

Countries such as the United States of America and France tax money won through gambling. But here’s the great news, in the United Kingdom there is no taxation on anything you win from betting online or in an actual casino, or bookies.

Just to make sure we have clarified the full details, this is for all players who are in England, Wales, Scotland, and Northern Island.

Are There Any Additional Taxes I Should Be Aware of?

You may be affected by one of these two taxes, depending on what you decide to do with your winnings.

We now know that the casual gambler doesn’t have to pay tax, but what about the professional players who enter tournaments and could win hundreds of thousands of pounds. The UK’s law on taxation states that no gambling related winnings are taxed by HMRC, which means that even if you regularly win or class gambling as your profession, you do not have to pay tax on your winnings. Of course, if you are betting outside the UK, then you may have to pay taxes to the country that you won in, for example if you took place in a tournament in Las Vegas.

How Are UK Gambling Companies Taxed?

We’ve gone into this a little within the history section above, but it’s important to explain fully because there is a slight impact on the gambler. Gambling companies have to pay a 21% point of consumption tax to HMRC. They will also have corporation tax on top of that, which is a legal requirement of any UK based Limited Company. Land based casinos will slightly vary from the online versions, because in the UK there are varying taxation rates on the games, for example roulette will be different to slot machines.

Because the gambling companies are so heavily taxed by the UK government, they will look to offset the costs elsewhere. This is where we players come in because many brands are known to build some of the costs into the odds.

Within the UK there are two main pieces of legislation which protects players and the gambling companies.

(2) ensuring that gambling is conducted in a fair and open way, and

(3) protecting children and other vulnerable persons from being harmed or exploited by gambling.

This Act was introduced to make the legal framework of the Gambling Act 2005 more robust. It focuses on the remote online casinos and covers two specific areas;

Gambling Regulations in the UK

The online betting industry has exploded in the last twenty years, but alongside that came issues with underage players, money laundering and gambling addictions. This led the UK government to introduce the UK Gambling Commission (UKGC) on the 01st September 2007. There was a need to make sure that the online companies conducted themselves legally, fairly and most importantly ethically. The UKGC began by bringing in licences for all gambling related business, which could be removed if the company was found to breach the Gambling Act 2005 or behave unethically. If their licence was removed, then they would no longer be able to provide a service to any UK players.

Since the inception of the UKGC there have been significant changes to all UK gambling sites. Including more information about promotions on banners and imagery, the removal of credit cards as a method of paying for credit and in-depth verification checks called ‘Know Your Customer’ and ‘Source of Wealth’. The addition of these changes has led to greater protection for vulnerable players and reduced the impact of criminal activity within the industry.

Summary of Gambling Winnings Tax in the UK Explained

Pretty much the answer to this whole article is ‘no’, you don’t have to pay tax on any of your gambling winnings within the UK. So, if you win big then it’s all yours, which is a wonderful thought.

We have the reassurance that the betting industry is now so heavily regulated, that we have the back up of the UK Gambling Commission should there be any problems. But our advice is to make sure that the betting site you have chosen is on the UKGC licensee register as being active.

We have plenty of other articles which can help you enjoy your time online, including How To Open a New Online Casino Account UK, Which Casino Bonus is Best for you and Withdrawing Credit on an Online Casino.

October 14, 2021 Boku Slots Comments Off on No Account Casinos